Ohhh babbbyyy, you, you got what I need


To embark on an experiment to start genetically modifying myself I needed to obtain DNA and not just any DNA, some that was specifically encoded to work with humans. This is because not all DNA works with every organism. In fact most organism have their own unique codes that allow and don't allow certain DNA to work with them. Kind of like a security system for the cell. Like the CRISPR kits we sell won't work on humans without modification, they only work on bacteria.

The purpose of most DNA used for genetic engineering is to make proteins1 The targets I wanted to start with were Green Fluorescent Protein(GFP) and Red Fluorescent Protein(RFP). These are genes from Jellyfishes. I figured that in a best case scenario I would be able to actually see my cells glow and fluoresce if they were engineered. Worst case scenario is that I would need to extract the mRNA to look for the presence of these new genes in my cells but they would be easy to find if works because they are not endogenous(natural) to human beings.

Anyways, good thing for me there has been a bunch of work on modifying human cells with fluorescent proteins in petri dishes or cell culture as it is called. What this means is that there is already a bunch of DNA in existence that was made to work with human cells I just needed to find it and obtain it. Which can be more difficult than you think.

I am not going to out any companies specifically in this post because they may or may not want to know they are or have sent their DNA to me for the purpose of human genetic engineering. I am sure you can ask around or do research online and find companies that will sell to you.

I set about obtaining pieces of plasmid DNA2,3.
And scary but not scary I wanted to obtain a virus4 that could put this jellyfish DNA into my cells.

One of the most difficult things about being a Biohacker is that companies sometimes won't sell things to you. Not because there are any laws regarding the sales but because they want to control who is able to do Science. Fuck that shit.


How to Obtain DNA
This is a best practices in how to obtain things that companies try and keep from individuals because they think we are stupid. Some cases may take much less and some cases much more.


One of the companies I used is one of the largest suppliers of plasmids. They actually will ship to most anyone and most any address as far as I can tell. They have even encouraged me to lie to them to bypass their own review system. #FunFact


Ok, so what is the difference between using plasmid DNA and a virus?

Current, technology makes using a virus cost and skill prohibitive. Though I could purchase the virus for $500 or so it came in a limited supply. The benefit however is that it should work out of the box. I would not need to do much to make it ready. Plasmids are inexpensive, they don't work as well in terms of human engineering as viruses do but once you have some you can replicate as much as you want indefinitely. You can give it to friends to replicate and use and they are easy to modify for new uses.

I wanted to explore multiple avenues with my goal being to eventually focus on plasmid DNA because I want to work with technology that is cheap and accessible.

At first I began working with plasmid DNA. Though it is somewhat easy to work with it requires that one know how to do bacterial cell culture, plasmid purification and maybe even ethanol precipitation. You need a centrifuge and lab grade pipettes and probably an incubator and shaker. While most of this stuff will only run someone a few hundred dollars it is still a hindrance. However, I started a document on best practices for plasmid purification for human genetic modification. What one can do however is send the plasmid DNA or bacteria with plasmid DNA to a company and have them just purify you up a bunch. Depending on how much you need this can run from $100-$400+
Making and purifying your own viruses while not challenging from a technical or safety sense it is challenging from an equipment and resources sense. One would need to be able to do human or mammalian cell culture and transfection and have materials to purify the virus. Doable but these techniques are far outside the scope of a garage lab at the moment. Maybe not so much in the near future though?

The DNA in the virus came prepackaged and ready to go and despite what people might think, AAV is considered Biosafety containment level 1 by most places(which is the least strict and is on the same level as Sodium Chloride or Agar i.e. it is safe).

Obvi, after I received my DNA it was time for the experiments to begin!


Genetic engineering in humans usually occurs as intramuscular injections or systemic injections(i.e. into the blood stream. Both of these ways seemed silly as they made it difficult to perform any testing to see if the experiment worked. Muscle biopsy on myself? YIKES! I decided on topical skin and subcutaneous(under the skin) delivery of DNA! The crazy thing is that there hasn't been as much scientific literature and research as I expected on this topic. I did collect a sampling of papers however that I found interesting and you can find them here: https://drive.google.com/open?id=0B_R75gIJvkFUMkhrbUdZRzhscGc


July 5th 2016 was the first day I started experimenting on myself.


1. Proteins are awesome. They are little molecular machines inside cells that let cells do things. Read about them!

2. Plasmid DNA is small circular DNA that is separately from the host cells genomic DNA(compared to genomic DNA. Genomic DNA is the DNA that is transferred from a parent cell. The standard set of genes each cell comes with). Plasmid DNA is circular so that it can be replicated easy by organisms such as bacteria. This allows researchers to grow bacteria and extract the plasmid to use for other purposes.

3. Here is a link to the DNA sequences of the plasmids and virus I used and am using: https://drive.google.com/open?id=0B_R75gIJvkFUMkhrbUdZRzhscGc

4. The virus in question is a non-replicative(it doesn't replicate and reproduce) Adeno Associated Virus(AAV). It has been used a bunch on humans and shown to be super safe. Fortunately, I was actually also able to obtain AAV1 which is efficacious across a number of tissues including keratinocytes(which make skin). 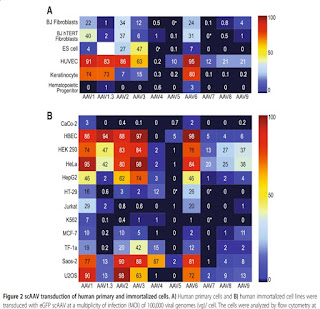