I think that the future of wearable technology is engineered bacteria.

So I started working with skin bacteria for a project. I am trying to see how well skin bacteria can be engineered and used to colonize the skin and perform the process that they were engineered to do. The processes I want them to do at the moment are very basic, express fluorescent proteins or use luciferase to glow. This project then a little more difficult than I expected.

What I did not know is that many of the bacteria on our skin are antibiotic resistant. A little scary? Actually not that scary as it seems a natural step in our symbiotic evolution. So why is this important then? When engineering bacteria scientist often use selection markers and most of the time these are antibiotics. This is because genetic engineering is not quite as efficient as you would hope it to be and also because finding the bacteria that have been engineered can be a difficult process if one is searching through a thousand different bacterial colonies. Antibiotics are great because they kill off all the bacteria that have not been engineered and you are usually left with the ones that have been engineered! But that's not always the case as I'm seeing now.

First, I started off isolating bacteria from my skin by taking swabs and streaking the swabs on plates and then growing them at different temperatures. Next, I chose some bacteria and grew them up and put them in a solution that would make them more tenable to uptake foreign DNA (The DNA I wanted to put inside them). What I found was that the antibiotics that I was using for selection were not working. So then I started again.

First I had to test each bacteria isolated from my skin and see if the antibiotics that I was using for engineering selection actually kill the bacterium. 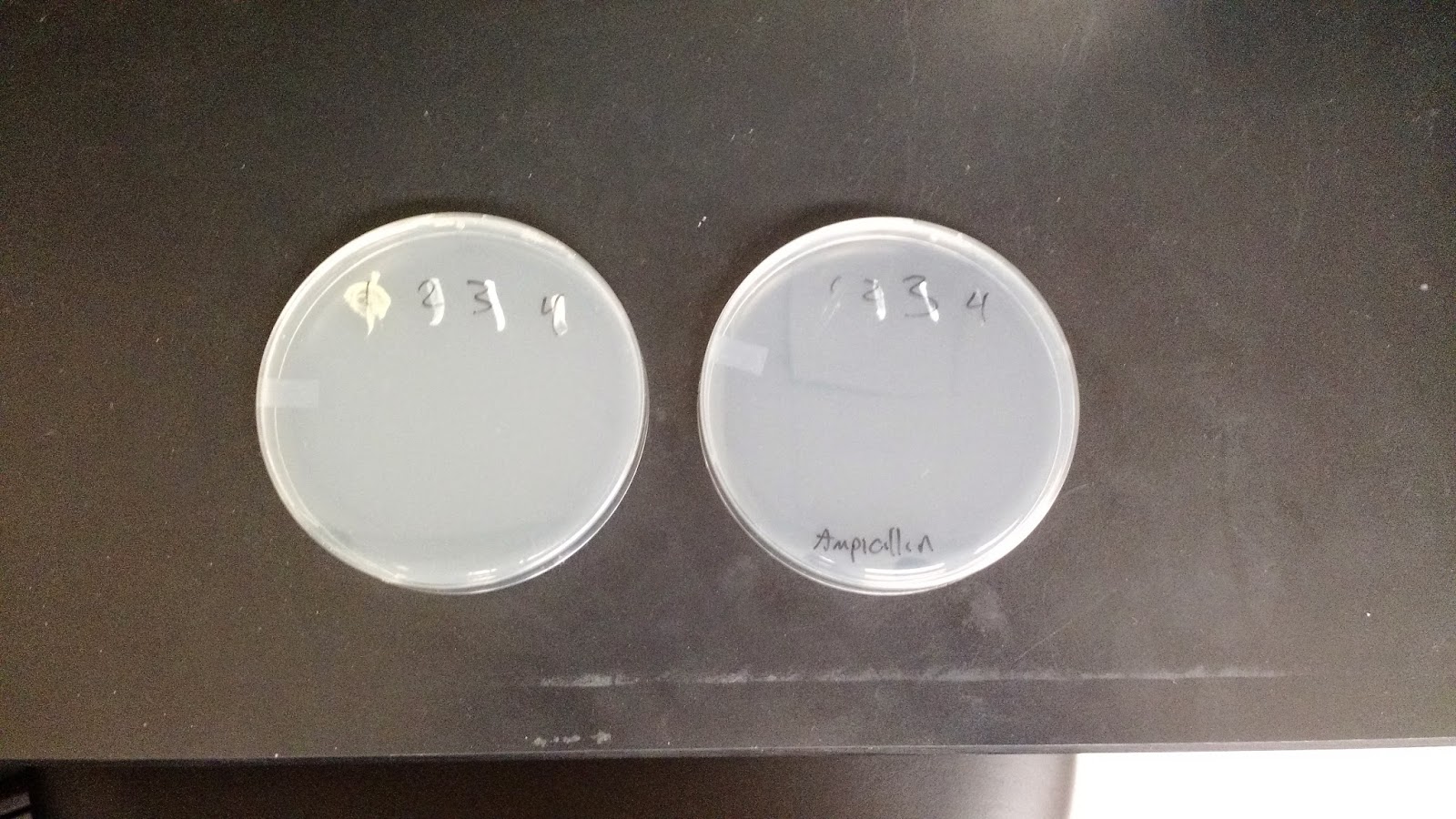 Even after I found a bacterium that was not resistant to the antibiotic I was using (Ampicillin) I found out it was still resistant to other antibiotics (Kanamycin). You can see in the image above that bacteria #2 and #3 both survive on ampicillin fine. I ended up finding out the #1 also doesn't mind ampicillin much when doing liquid cultures so I have been working with #4.

Currently, I am using bacteria #4 and trying to put plasmid DNA inside of them. Once I can tell that this works and the bacteria grow and function on media I will test the bacteria to see if they can grow at all on my skin. The test after that will involve seeing if the bacteria actually colonize my skin so that even after washing the affected area there will still be some bacteria left.

I think this will be the most difficult problem.

As many scientists suggest engineered bacteria that are creating proteins or products that are not meant for survival are at a disadvantage when fighting for a spot on your skin amongst all the other bacteria. However, there are many ways to overcome this including giving the bacteria some sort of selective advantage by altering its metabolism to be more robust than naturally occurring bacteria.

I am about to sequence the DNA of bacteria #4. By the looks of it I would say it is either a Streptococcus or a Enterococcus (This is an attempt to impress myself with my weak bacterial knowledge). As my work has made me quite the amateur microbiologist lately being able to identify by colony morphology and color pretty well.

I will keep updating as this experiment progresses.

Originally this idea was bounced around by myself and Jun Axup, though I am sure it is probably not original and has been tried by others. My goal is just to test some proof of concept ideas.

Most of my Non-DIY Science friends don’t know this about me but about a year ago I started an online store that sells molecular biology supplies to anyone who wants to buy them. I also sell them at very inexpensive prices because I buy them in bulk from manufacturers or other suppliers. It is called The Open Discovery Institute (ODIN). I don’t remember how exactly that name took shape, all I remember is that James Crooks and I were thinking of starting a Hackerspace on the South-Side of Chicago (Which we eventually did not but he eventually did!). I really believe in the strength of the masses. I think that people with access to Science supplies and equipment should be able to do Science well. For me it all starts with access.

During graduate school I would sometimes do experiments at home and when I wanted to buy supplies there was no place I could go to find all the things I needed at reasonable prices. It would take me hours just to find a good price for two chemicals and then there was multiple shipping costs and such. When I arrived at NASA and had a little extra money I figured I would invest in people. A single person doesn't have much power. A single person can die, disappear, give up. Many people can contribute to something and do something much greater than what a single person can do.

One of my favorite hypotheticals is "What if the population of Scientists in the world doubled or tripled?" It would be exciting, it would speed the rates of discoveries! Life would be prolonged from a better understanding of diseases and more discoveries could be made and we would have a little extra time to see and create beautiful things.

I invested in The ODIN as an experiment for me, 1) To see what kind of demand there was out there for providing these supplies to DIY Science peeps, & 2) To see what it is like to run a business.

What I have figured out is that I really suck at running a business. At least a business where I am the sole employee. I am great at inspiring people and motivating people and I have alot of knowledge and skills to share. I just am awful at the businessy things. I mess up orders, I give away lots of free stuff. I don’t charge as much as I should. I don’t keep track of the finances.

That's the bad or I guess maybe it is good I learned that.

However, the most positive thing about The ODIN is that people actually need this service. I have sold and shipped ~50 orders over the past 10ish months to the US, Russia, Canada, Taiwan, France, Netherlands, & many others. People are actually doing Science in their homes, at Hackerspaces, in High Schools.That is pretty exciting.

The reason I never told most people I know about The ODIN was because it was an experiment. I wanted to see who would use it organically. I have told people on DIY Bio mailing lists and people who use Biocurious, the Silicon Valley Biohackerspace and have had a number of repeat customers.

I want to tell people about it now because the experiment was a success. Many academics I know think that people outside of labs don't want to do Science or have no way to contribute. It is untrue. There are people who have a passion for Science who were not formally trained who are actually attempting to contribute.

I think it is pretty obvious now that with such easy and inexpensive access to knowledge people are using it to do things on their own. They might be called “Makers” or “DIYers” or even “Citizen Scientists” but whoever they are, cool shit is being built and created.