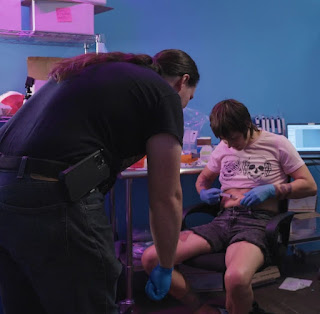 I extracted my own fat tissue using a needle and syringe and grew my own stem cells from it. I then differentiated these stem cells into neuronal and bone cell lineages.
I wrote about it here

A Taste of the Anthropocene

circa 2022
This was a collaborative pop-up art show project with Jia Bao Li, Cooper Galvin & Lera Niemackl
This project was a culinary experience focused on tasting different parts of the anthropocene.
My contribution was focused on two main courses the Utopian future of humanity and the Dystopian future of humanity.
The utopian future was a theoretical piece around the idea of a genetically modified chicken egg that was actually a mimosa. We hang carved egg shells into cups and spherified orange juice using alginate and filled the egg with Champagne.
The dystopian future was a McDonald's Mac. Reminiscent of  Big Mac. I recreated the Big Mac flavor into a slurry and then freeze dried it in cube shapes and placed them in custom painted styrofoam containers. 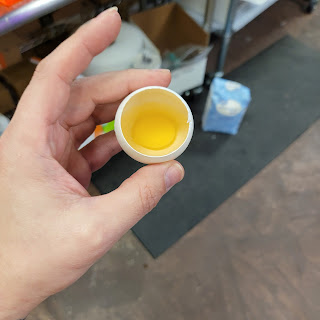 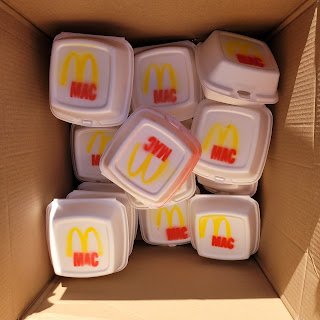 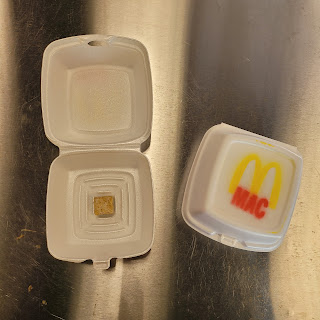 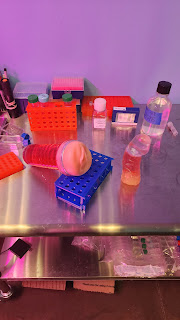 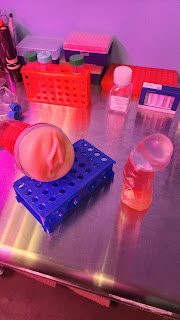 circa 2021
I isolated and grew cells from a chicken using minimal resources in my effort to make a meat garden in my house. I grew enough chicken cells so I could eat and taste them and livestreamed the whole process. It was a very small chicken nugget.
Here is a guide I wrote on how grow chicken cells yourself 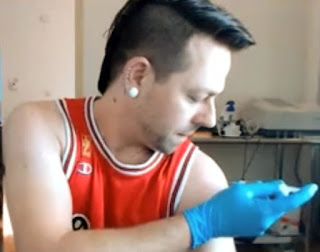 Myself and two other Biohackers successfully created and tested a DNA COVID vaccine on ourselves before one was publicly available. We livestreamed the whole process to show how it was possible. It resulted in my ban from YouTube.

Videos of the experiment are available at
https://odysee.com/@BiohackThePlanet:3
It was covered in few places
https://www.bloomberg.com/news/articles/2020-10-10/home-made-covid-vaccine-appeared-to-work-but-questions-remained

everything was beautiful and nothing hurt 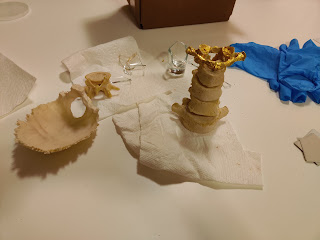 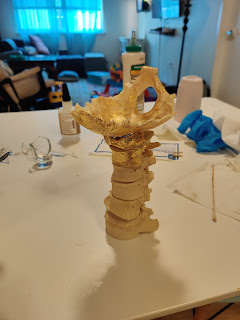 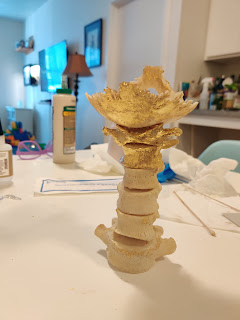 Real human occipital bone and vertebrae formed into a chalice to be used for suicide. The chalice is coated in 24k gold by using gold leaf and gum arabic. Then it was coated in plasmid DNA that contains a custom synthesized suicide note that contains the phrase "Everything was beautiful and nothing hurt". The idea is that when poison liquid is added to the chalice it would dissolve the gum arabic and release the gold and attached DNA which would function and a nanoparticle carrier of the DNA into the cells of the individual. The suicide note would become part of the genetics of the person.
The message was encoded using ASCII and binary using simple A&T and 0 and G&C as 1
It also includes the message DNAMESSAGEBINARYASCII
before the binary encoded as a single letter amino acid code message
ATGGATAACGCGATGGAAAGCAGCGCGGGCGAAATTAACGCGCGCTATGCGAGCTGCATTATT GAGCTTGTCTGGGACCATCCATGTCTCCCAACATCGGCTTCTCGGTCAAAGCTCAATTGGAGAAGTGCTCCGAAGGAAGCCATCTATTTACCGTCGCTCCATTTGTGCGATGGAACAAAATACGATTCAAGCTTGTGTGGATTTGTGCCTCACTGGCTCAAAGGAGTTGACGAACGAAGGCTCAGTCGACGTTTTGTTAAATCGATTTCTGGTGCGTTCCTTGAATTGTATAATGGAGGCTTCCACGGCACGGTCATACGACTATTGGACTTCACGTGGGTTGGAAGGCTTGTATATAGGAGTAAACGCAGAGACGCATCTTGGGAGATTATTGCTTGA

Human Cell Culture in your kitchen

circa 2019
For around a year I worked tirelessly to figure out a method to be able to grow and culture human cells without expensive equipment and I figured it out and created a class to teach people how to do it themselves.
A playlist of the class videos

A step-by-step guide to genetically modifying yourself with CRISPR

circa 2017
I ran a "workshop" that was very performance arty during the 2017 Synbiobeta conference and injected myself with a DIY CRISPR genome editing plasmid. I livestreamed the event. My goal of this performance was to challenge the dogma around the safety and cost of CRISPR genome editing in humans. If I could do it, anyone could. So what's the hold up?
Here is the step-by-step guide
Here is the livestream
Many many news articles about it online if you search
This experimental art piece can also be seen in the Netflix documentary Unnatural Selection 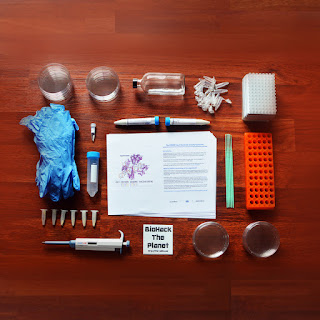 circa 2015, ZKM Museum of Contemporary Art

A project in collaboration with Lynn Hershman Leeson. The Infinity engine was a multiroom display introducing people to modern biomedical and genetic engineering. The project attempting to cast biological research in both a utopian and dystopian perspective. The largest part I worked on was created a room in which a participant walks in and is engaged by a talking screen that captures their image and uses a machine learning on a library of images I gathered in an attempt at reverse engineering a persons genetics from their image. It was all programmed by me. I also worked on making displays for genetically modified fish.

circa 2015
I built and programmed gloves that turned physical movement into a computer input device to control things like a computer mouse, computer keyboard or even music.

circa 2015, played live at MoMA PS1 & Humboldt-Universität zu Berlin
Created an audio-visual installation at University of Chicago in collaboration with Francisco Castillo Trigueros
The Chromochord is a musical instrument that allows the musician to strum proteins quantum mechanically like they would strum a guitar. The basis of the instrument is a type of protein called Light-Oxygen-Voltage ((LOV) Pronounced Love) domains. These proteins respond to light by undergoing a quantum mechanical energy transition(from a singlet to triplet state) that changes their photo absorption properties. This can be measured spectroscopically. Once in this triplet state this “vibration” decays over time due somewhat to thermal energy. It is very analogous to strumming a guitar string and the kinetics can probably be modeled very similarly. The measured values from these fluctuations in excitation and decay can be used digitally to modulate MIDI notes on a computer. It basically works by the musician interacting with the protein using light by activating LEDs, the excitation of the protein is measured spectroscopically as it is excited or decays and then the computer sonifies this into whatever sound the musician wishes. For The Chromochord I wrote the software and built the hardware and synthetically created and purified the proteins.
What the Chromochord sounds like
https://drive.google.com/file/d/0B_R75gIJvkFUdXRxOC1Ja0tXdWM/view?usp=drivesdk&resourcekey=0-kWPZm5L0wUYtspcwhbEUyg

Sonification of a molecular dynamics simulation of HIV protease