Whenever I start to work on something I have trouble sleeping. The problem is that I am always working on something so I always have trouble sleeping. It's not worry or anxiety, it's hard to describe it without saying that it is just excitement. Not like happy excited but it is an anticipation. When I am working on an experiment, to me it's not even really Science, I am building a world. I am taking this world that exists as a dream in my mind and creating it in the physical world. I stay up at night imagining how to do that.

Starting the experiment to genetically modify myself was scary and daunting. The world I created was so intricate I didn't know if I could possibly share it with anyone or even succeed at creating it.

It is one of the issues I always run into and one thing I have a hard time communicating to journalists. They want access to this sacred part of my life but treat me like a paycheck. They want their sound bite and I try and give it to them but how would I explain my motives? When they were many and complex. To create something beautiful, to test out new technology to try and develop something that others could use, for medical use and on and on The reasons were so arrayed, I had been thinking about it for months. How do you explain a months worth of thoughts to a person who wants to condense it down to one sentence? Even those you are closest to?

And then you start to think about the experiment. How I read countless papers, researched DNA plasmids, viruses and virus serotypes, mammalian expression elements, chemicals to use and try, DNA vaccines, experiments on mice, and you ask me how am I going to do it? Is it safe? How do I explain the reason for every choice, is it possible unless you read the papers I read and thought through everything like I did?


Hair removal
Not as complicated as it sounds or maybe more complicated than it sounds? First you need some depilatory cream. Yeah, WTF is that shit?I remember sitting there reading this paper on topical DNA transfection in mice and they are talking about depilatory cream and how it can help transfection efficiency and I was wondering how I could get my hands on this stuff. I come to find out that it is Nair, well you could have just said that.

*Sidenote - Though this example is kind of a joke one of my issues with Science is that even a trained a Ph.D.(myself) oftentimes has trouble deciphering papers. The information you really want to know like DNA sequences and techniques is often hidden and obscured in papers. Someone might say "Well those papers are not about the sequence and that is just too much information so whatever". Until recently I was trying to piece together a DNA sequence from a paper about DNA sequences and they weren't in the paper!!!! How does one even publish a paper about new synthetic promoters and not have the exact promoter sequences used in the paper?!!!! I could have pieced it back together from the clues but I figured I would email the author instead and they responded that the sequences were patented and so I would need a license and they didn't give them to me!!!! WTF! Standing on the shoulders on giants? More like standing on the shoulders of patents and paywalls so no one can advance Science!

Nair works as you would expect it. Easy to use on the arm for hair removal.

Your actual live skin cells are hidden under layers of dead skin, the stratum corneum. 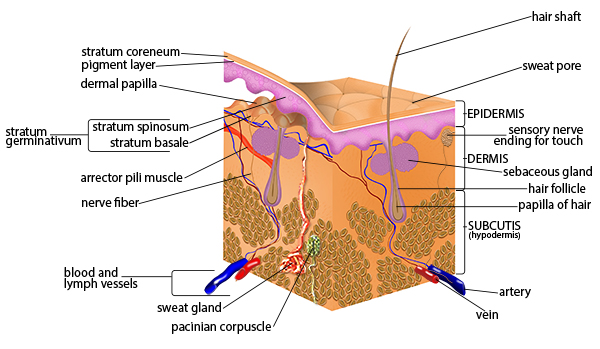 You can imagine that if you are trying to genetically engineer cells they need to be living and alive so that they can take the DNA you put in them and turn it into protein(jellyfish green fluorescent protein in my case!). What this means is that you need to remove the stratum corneum. Now this next part is no joke. Scientific papers indicate that the best methods are either tape stripping or tooth brush scrubbing and I quote:

"The shaved dorsal skin was then either stripped by applying Blenderm tape (3M Health Care, St. Paul, MN) five times and/or brushed using a tooth brush with rounded firm nylon bristles. The number of brushing strokes varied from 50 to 200."

I still haven't tried the tooth brush method because I just can't find it in my heart to scrub my skin 200 times with a tooth brush. Instead, I have mostly stuck with the tape stripping method. It does hurt. Some tapes work better than others. I usually use duct tape or packaging tape. I usually stop when putting alcohol on it burns.

Now this is a complicated one that I still haven't figured out because there are so many different things to try and so many different variables. Topical application experiments of DNA have been extremely limited as far as I can find. You can use water, or some ions or salt or Tris or DMSO or ...... you get it. Do you cover it or evaporate it or inject it, electroporate it? I think alot of times with experiments it is easy to become caught up in what is the best way to do something instead of just doing it. Obviously, doing this experiment with no knowledge or preparation would be foolish but I have learned that I will never be 100% ready. I don't know what DNA application method is best and over the course of my experiments so far I don't know if I have found out yet either.

Normally, I would just apply it to my skin and then evaporate it using a heat gun of sometype. This seemed to work the best and fastest and wouldn't hurt the integrity of the DNA I imagine. I also tried out just putting tape over the drop so it was just in constant contact with my skin.

I had a plan but I expected that from the beginning things wouldn't goto plan but I adapt well. hahaha.

Initially I hoped that I would be able to see the genetic engineering in my skin by looking for fluorescence by exciting the protein and then looking for it using a visual filter. I can say that my first experiments doing this most likely didn't work. They could have worked but it didn't seem like I would ever be able to definitively tell if the cells were making the jellyfish GFP.