How to Genetically Engineer a Human in Your Garage - Part I

My name is Josiah Paul Zayner. If my name sounds "religious" that's because it is, Josiah was a King of Judah in the Hebrew.Christian Bible, Paul was an apostle of Jesus. I have three brothers Zachariah(older) and Micah and Jedidiah(both younger).

I don't remember a time when my Mom and my Biological father were together. He was severely abusive. We were poor. We lived on a farm. It wasn't a huge farm like people might imagine but a small animal farm in rural Indiana. We collected eggs from our chickens to eat and drank dehydrated milk. I have never met anyone else who drank dehydrated milk. I don't remember much of my childhood because of the trauma from abuse. I only see small flashes like a nightmare one can still feel emotionally but barely recall what exactly happened. This includes the now infamous family story of discharging the the gun my Mom had in the car door for protection. My Mom's second husband was also abusive. I ran away from home twice. Living with computer hacker friends in Oklahoma and Texas after high school.

My Mom is an amazing human. I would not be where I am today without her and her willingness to fight for her family. 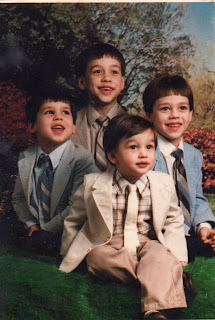 Me(on the right side) and My Brothers circa 1987

Growing up I was never particularly what one would consider smart or gifted. I have just always liked to build and create things. I was mostly an introvert and would often get lost in my head, I still do. In high school I was mostly a jock but navigated through most groups. It was in high school that I found out about computers. I found out that if I wanted to learn something I could just read and teach myself.


The Conscience of a Hacker

My high school teachers made fun of me because I would always be reading in class. "What are you going to be a book reviewer one day?" and then the class would laugh and I would go back to my reading. I was almost expelled from High School twice. The first time I punched a kid a bunch and he ended up in the hospital. They handcuffed me in class. I was arrested and suspended. The second was for writing a program called "HackTheSchool.exe" and putting it on the shared network drive so anyone could access it. The program was a joke, it didn't actually hack the school but teachers back then didn't have enough knowledge to read the code and be able to tell the difference. In lieu of expulsion I was suspended and banned from ever using a computer in the school that was connected to a network or the internet. They had a special computer in my programming class that was unplugged from any network just for me. 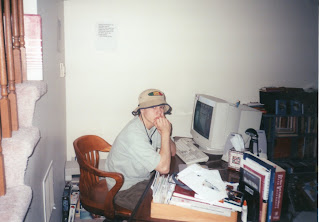 Me on the computer at home circa 1999

I eventually became a "computer hacker" and was a member of Legions of the Undeground(LoU) a hacking group. While that story is long and for another time it is the foundation of why I started my company The ODIN and have invested heavily in Biohackers. During that time in the 1990s and early 2000s I saw kids like me who were awful at school, came from broken homes, who could code circles around and out technical 99% of the world. All of us were self-taught. Little know fact is that you can still find a piece of software I wrote back then on The ODIN website and people still download it. Nowadays all of these people have great jobs at tech companies and most have still never finished college.

When I was 19, I was able to obtain a job at Motorola doing programming and networking. I worked there at the end of the dotcom bubble and then during the burst. I was laid off with tens or hundreds of thousands of other people. The one thing I took away from Motorola came from Dennis Tsai, he told me "People can take away your job but they can never take away what is up here (pointing at his head)." I could have taken another Tech Job but instead decided to goto school and learn. Fill my head with information that no one could ever take away.

Because I did so poorly in high school, I started back at a community college for around 1.5 years before transferring. I ended up majoring in Plant Biology and obtaining a BA from Southern Illinois University and though I did much better than I did in high school I just wasn't good at standardized education. Still there was a minor bit of meritocracy left back then and my Master's Degree at Appalachian(la-chun) State led to being accepted to a Ph.D. program at the University of Chicago.
I owe a huge debt to Ece Karatan, Tobin Sosnick and Tao Pan who taught me in Graduate School. Without them I wouldn't be who and where I am. I also think they owe me an apology because it has taken me years to unteach myself the critical nature I was driven into. I was taught to question everything and be constantly vigilant and critical. While this taught me to be logical and rigorous I think it stole my creativity, it stole my ability to dream and believe. Graduate school was a beautiful and extremely painful experience. It's hard for me to recommend graduate school, I think it really depends on the individual.

After graduate school I was awarded a fellowship working as a Synthetic Biologist at NASA engineering bacteria to break down and recycle materials for long-term space travel or when we colonize other planets. That was an interesting life experience but if you really want to read about that you can check out previous blog posts Here, Here and Here. Let's just say I don't work well in the system. I don't do well with rules that don't make much sense or people who are more interested in improving their position than contributing. Fuck the system. 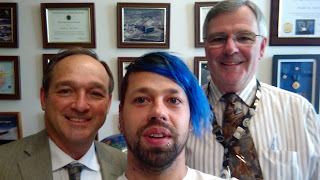 My last day at NASA and no one is around because no one is ever around.
Jan. 5th 2016

2015 culminated with me leaving my fellowship at NASA because I was fed up with the system, with everything. Outside I saw so many people hungering to be genetic designers and at NASA people hired to do the same siting on their asses. I began to work at The ODIN full-time.

My goal at The ODIN has been to give people access to resources and knowledge so that they can Biohack. I have seen what hackers can do and usually because of their different path in life have unique insights into problems and tend to be more creative than trained and pedigreed Scientists.

If a poor kid like me can end up at NASA and now running their own company but never quite be at the top of their class, never scoring well on tests no matter how much effort I put in, something is wrong with the school system. I can program 3 or 4 languages pretty fluently, can do electronics and basic circuit design and have a Ph.D. in Biophysics but even in graduate school no matter how much I studied I would always end up with lower grades than my peers. The education system is broken. The social system is broken. Or maybe they are all work fine and it is just me who is broken.

That's why I fight.

I fight for access for everyone. But I fight fiercely for the broken among us. Those who need hope.

In 2016, I began to fight hard. I explored microbiome modification for health and privacy and did a thorough Scientific analysis that you can read Here, Here and Here. I found that it was possible to successfully transplant a gut microbiome and it alleviated alot of suffering in my life. It hurt and was hard.

In Sept. I ran the first conference for Biohackers(http://biohacktheplanet.com), which I worked my ass off for and poured so much into. It was amazing and turned out so much better than I could have ever hoped.

But still there is so much more to be done. The system is fucked up and so many people who hunger for knowledge and the ability to help others can't.

I didn't grow up wanting to be a Scientist or Biohacker or Genetic Designer. I was too poor to dream of that possibility. But, I did grow up wanting to help people and this has lead me to a project that will be a culmination of my life's work so far, Genetically Modifying humans. Genetically modifying myself.

This is me. I am a Genetic Designer.

Sorry, this post wasn't about the actual human genetic engineering experiment but I feel I need to give my background to tell my story.