Last year at Science Hack Day SF I led and ardent band of marauders into battle in an attempt to create a simple method to sequence DNA. Though we accomplished some stuff it was alot of work! This year I just wanted to hangout and relax and code for 8 or 10 hours straight.


The project I decided to work on was the amino acid dependence of secondary structure lengths in proteins. Proteins as we all know and love, are little nanomachines. In order to better engineer and create proteins from scratch we need to understand how they have evolved and why. The smaller parts that make up proteins (i.e. alpha helices, beta sheets, &c.) are made up of specific amino acids with specific properties. I wanted to take that one step further as I have never seen a paper or heard much about the amino acid dependence based on the size of a secondary structure element. One could imagine that a smaller helix might have a propensity against certain amino acids that are less helical as opposed to a longer helix.


I downloaded the amino acid sequence and secondary structure of each protein in the PDB(http://www.rcsb.org) and then wrote code(code is here) to parse and quantify the data. In the end I was a little dissapointed. It doesn't seem like many or any amino acids really have a dependence on secondary structure length.

Here is a graph of the ones that seem to change the most. 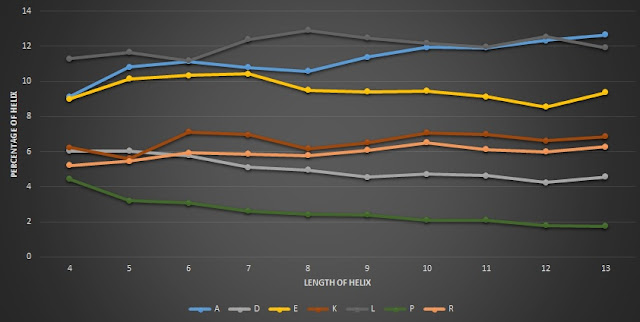 Alanine(A) might have some dependence and same with Proline(P) though I think Proline is an artifact(helices tend to end with prolines as a helix breaker, if this helix breaking residue is included in the count it can skew the percentages for shorter helices).

And the Nobel Prize goes to a Biohacker

I heard something said by a collaborator, Vidhi Mehta, which moved me.
"Will the next Nobel Prize be given to a citizen scientist?"

I sat back and I imagined. What if this week a phone call was made to a Biohacker that I know, instead of the usual academic Scientist? Wouldn't that be something?

Thinking about my life and my career, I see how important this is to society and I want to be a part of that. I want to make Science available to everyone so they can contribute to the benefits of society.

This could be you but it probably won't be easy. It will probably take hours and years of dedication and work and perseverance but I think there is a chance that in the next 10 to 20 years, you can pull it off.

I think education is key. I always try and impress on the Ph.D. Scientists that I know how much they need to teach and lead and show others how to do Science. How they can give knowledge to change the world they live in.

One thing I have found by working at NASA is how little work a single person is capable of on their own. This is also sad because Nobel prizes are given to the Principal Investigator who didn't do the experiment and who might not even have come up with the experimental procedure. I guess the prize needs to goto someone but it seems the whole, limiting it to individuals, in the majority of cases is wrong. I think this is important because many Biohackers still work on projects in isolation in the majority of cases.

Biohackers need to start coming together and combining their powers. Maybe then the Nobel Prize will be within reach.