Lately I have been thinking alot about water. An interesting thing about macromolecules is that they are slaves to their solvent well at least some people think so... This train of thought was pioneered by Hans Frauenfelder. I heard him give a talk a few years ago and he still uses an overhead projector. Water has structure. It is a bunch of H2O molecules interacting in specific patterns.
Water structured(http://www.chem.wisc.edu/deptfiles/genchem/sstutorial/Text7/Tx75/tx75p2.gif)

What I am going to do is run some simulations with different concentrations of Sodium(Na) and Chloride(Cl) ions and see how it effects the structure of water and see if it does in a predictable way and also what concentrations are needed.

So initially I am having problems using GROMACS and I want full electrostatics but that requires turning off periodic boundary conditions... Hmmm What should I do? Well I did a run with just normal parameters except I extended the electrostatic and Van Der Waals cut-offs. I kind of see what I almost expected unfortunately. 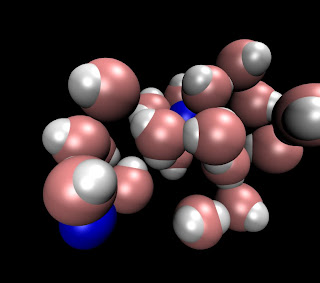 The pictures is just a few atoms from the simulation of 879 water molecules modeled using tip4p and 4 sodium ions and 4 chloride ions. You can see the sodium molecules in blue and water hydrogen in white and water oxygen in red. It's not that obvious but what you can notice in the picture if you look at the water molecules away from the sodium their Van Der Waals radii overlap but where the two sodium atoms are the closest the water molecules don't interact like the others forming a unique structure or unique interaction. The problem is if that the two sodium molecules are not relatively close this does not happen and I think it might be just because water is so awesome in its ability to rearrange in such a way that these molecules are only minor inconveniences. But it could also be because my box is essentially infinite in size due to periodic boundary conditions, which because there are "infinite" other simulations connected a water molecule never has to be without other interacting water molecules except when they directly interact with something you put in the system. My next step will be to remove the damn PBC.

This post has taken me a few days to try different simulation parameters and figure things out. Sorry. Will try and do more experiments when possible.
on May 30, 2012