I work at NASA as a research fellow. A research fellow is an indepent PostDoc that writes a grant proposal for their research. The proposal goes through review, there are about 50 new fellows accepted across the world per year for NASA.

It all started when I met Masood Hadi at the first Gordon Research Conference for Synthetic Biology in 2013. I was wearing a NASA t-shirt that said "I need my Space!". Someone I knew told me that there was a person from NASA at the conference and so I decided to introduce myself. We talked briefly about Science and I showed him my poster. He suggested that I should apply for a fellow position to work with him, only problem was that the application was due in 3 weeks!

I arrived back from the conference and emailed Masood to propose a topic for collaboration. Unfortunately, he didn't email me back till 1 week before the proposal was due(yikes even less time)! I worked my ass off and came up with something.

Here was my proposal: Zayner Proposal

Though it is not one of my best proposals I still think it was pretty cool.

The basic idea was to 3D print soil using light. It would work by mixing the soil with an engineered bacterial that would express and secrete enzymes to harden the soil when exposed to light. Shine light on specific parts of the soil and it hardens, in theory. I was using the pDawn system of light activated transcription and using iron reductase genes for soil hardening. Some limited research has shown(or just been suggested) that by changing the oxidation state of iron one can harden soil(very skeptical about it now). Both Lunar and Martian soils contain alot of iron(why Mars is rusty in color) so you can see why I wanted to mess with it.

The lab I was working in was not setup when I arrived at NASA! This meant it was my job to set everything up and test all the equipment. Not a huge deal but definitely set my research back a few months. There also was very little in the way of reagents and chemicals. Fortunately, most of the labs in my building are empty so I could "borrow" chemicals from those labs when needed and "promise" to replace them when we had our own.

A moment on this, in academia Professors are called PIs(Principal Investigators) they run labs and are able to use lab space as long as they have money and researchers working with them. At NASA it works differently. A lab is basically a space anyone can use if no one complains but if someone has already "claimed" it, then they will keep that space till they die or leave(I am not even joking. Sadly, there is a person on our floor who must be in his 80s and came into work a bunch when I first started. Word around is that he hurt himself(broke his hip or some such) and now has not been at NASA in at least 6 months. His lab door is locked and the space unused). The people who can claim space are usually Civil Servants and to all common knowledge it is almost impossible to fire a Government Civil Servant because it is a government appointed position. What ends up happening then is there are a bunch of people with no money and no one working in their lab space but lots of unused chemicals and equipment. There are ~7 of ~14 spaces on my floor that are either rarely or never used. Of the spaces used they contain 1-3 researchers at most! (not including when summer interns are around). Average academic labs are 5-10 people minimum. One space was just left until a fridge failed. No one cared that thousands of dollars in enzymes and chemicals were just destroyed, bacteria growing everywhere, it smelled gross, even to me(I have partial or almost complete anosmia). Occasionally, when bored, I would hold my breath and dig around in there to see if I could find anything useful. Recently, as in two weeks ago, a freezer failed and no one knew who's stuff was in it. Inside were animal specimens that had been around for 10 or 20 years and the only reason people knew the freezer failed was the smell the rotting tissue made in the building.

Things started to go downhill a little with my "mentor" Masood Hadi after I setup the lab. He wasn't around much and wanted me to do certain things. Experiments for some of his old papers and create figures and posters for him. At first I obliged, wanting to be a helpful colleague but when it appeared he was doing no work on his own and was just taking advantage of my goodwill, I stopped. Understand, Masood was not my boss. As a fellow, I am supposed to be a independent researcher, independently funded and working on my own independent projects, Masood could not fire me. He was supposed to be my colleague not boss.

He started requesting me to do more and more stuff for him and I started to refuse. This definitely did not help the situation. I'll be honest, and most of you who know me know that I am no diplomat, but I will tell you to your face what I think. Sometimes I can be better than others but I generally don't want to waste your time and mine by trying to convince you something I am doing or you are doing is going to work out well, when it really will not. I have never been described as "nice" or "a people person".


Around this time, I also learned that it would be difficult, if not impossible, to have my experiments sent up to the International Space Station(ISS). This is because the solicitations for proposal don't come out often(once every year or so) and then they take around 1.5-2 years to go up(if the rocket doesn't explode) and another 6 months to 1 year to receive them back. That's if your proposal was one of the few chosen among the 50? - 100? submitted.

Another issue I found out was that the equipment on the ISS is very primitive. Because it costs a shit ton of money to validate equipment, there is very limited equipment and so very limited experiments that one can do on the ISS. What this means is that most of my experiments that I proposed from my fellowship would not be possible to perform on the ISS, even if they could be sent up(testing light activated gene transcription in microgravity). Understand, NASA won't let you send up an arduino with some LEDs. They know how many screws are on their modules in the ISS and they can account for every one of them(I think). You can imagine that if an LED is lost and short-cicuits something, serious damage can occur! So to propose a new ISS experiment would require writing a million dollar grant for hardware validation and development.

Sooooo my research lines started to become less promising and so I decided to look for other research avenues that would interest NASA. Stuff that could be developed on Earth and have a greater impact. This led me to waste recycling.

Alot of Scientists in the sustainable resource field focus on breaking down cellulose and lignin. One day I was staring at the molecular structure of these molecules and I noticed that they were very similar to plastics, long hydrocarbon chains and aromatics. After some research I found that very little research had been done in the field of bacterial or fungal synthetic plastic degradation. I was pretty excited. Imagine if we could engineer a bacteria that could degrade all the plastic waste in landfills.

The way I pitched it at NASA is that the astronauts use about 200 kg of plastic, per person, per year. Imagine if you are taking a trip to Mars with a 4 person crew and it takes about a year to arrive. That means you will have around 800 kg of plastic waste! Throwing it out is not really an option because that far away from Earth, every material is precious, urine is proclaimed the liquid gold (right Elysse?). If you could recycle it into a feedstock for algae or plants or something of that nature it would be awesome! Also, obviously it would be super helpful on Earth, 32 billion kg of plastic waste is generated each year and less than 10% is recycled so each year ~28 million kg of plastic waste is deposited on Earth!

In the past year I have focused on two main avenues in my plastic degradation research: 1) Bioprospecting 2) Genetic Engineering.

I worked fast, came in on the weekends and in a few months time my research began to show promising results. I took my summer interns and we traveled all over the Bay Area, from trash dumps (trying to convince them with my blue mowhawk and government ID that I was a NASA scientist and needed a garbage sample) to having the interns jump out of the car and collect trash on the side of the highway (thanks Tyler and Nathan!).

Why collect plastic waste? The sun has strong UV rays and prolonged exposure to UV mutates a bacterial genome faster than normal. Plastics as a synthetic polymer was first introduced ~108 years ago, if a bacterial generation occurs in 1 hour, that is almost 1 million bacterial generations. We are talking at least 10^25 possible genomes of bacteria engineered naturally, in say, the bay area plastic (understand that the estimated number of human beings to have lived over the whole history of the earth is only 10^7(100 billion)). I figured that some of these mutated bacteria in nature might have evolved a mechanism to interact with and degrade plastics and survived to tell about it (that's natural selection!).

We ran large screens by washing off the plastic waste to remove bacteria and then attempting to grow them in a media that has no carbon source except fresh the plastic we added(polystyrene and polyethylene). Carbon is needed for bacterial survival so without it they die! This means that the bacteria would need to break down the plastics to live and grow. We had a bunch of successes and identified a number of bacterial gen(uses|ii?) through 16s rDNA sequencing. I used an electron microscope to actually see that the bacteria were colonizing the plastic! See the pictures below (that is false coloration to make it look cool). 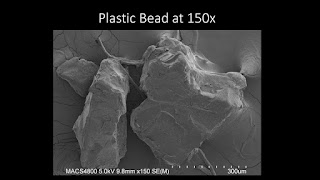 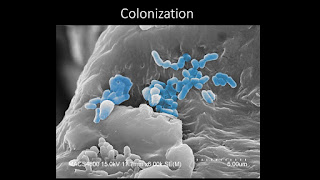 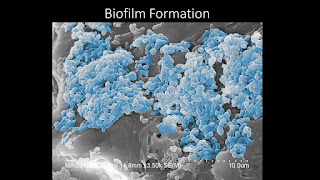 You can see the bacteria go from initial colonization to forming biofilms, (biofilms are basically just large communities of bacteria).

Despite my successes and promising research, my relationship with Masood became a disaster. He was on the search committee for a job that opened up at NASA and he told everyone else about the job but me (I eventually found out when someone randomly, not in my building or lab, told me about it). One of his only responsibilities as my mentor was to approve my travel paperwork, basically a formality. He refused to do it and many meetings and emails and arbitrations ensued. Finally, he was forced to sign the papers.

At this point my disgust for the NASA working environment was peaking. The first two years of the fellowship are guaranteed but the third year of my fellowship would need to be approved by Masood, the same person who was actively trying to limit (dare I say sabotage? (maybe a little to dramatic)) my career.

So what happened next? Stay tuned for the next episode in this on going series.

A Brief History of Biohacking