A question I received quite often besides the obvious questions such as "What can you tell me about the aliens that have been to Earth?" or "What experiments has NASA been doing with time travel?"

What is it like to be a Scientist at NASA?

I work at NASA Ames in Moffett Field, CA. We are located directly next to Mountain View and Sunnyvale which are considered the heart of Sillycon Valley. Google and many other tech companies have offices nearby. In fact Google recently decided to lease a portion of Moffett Field and during my tenure here I have seen alot of testing of the Google Self-driving car on our research campus. 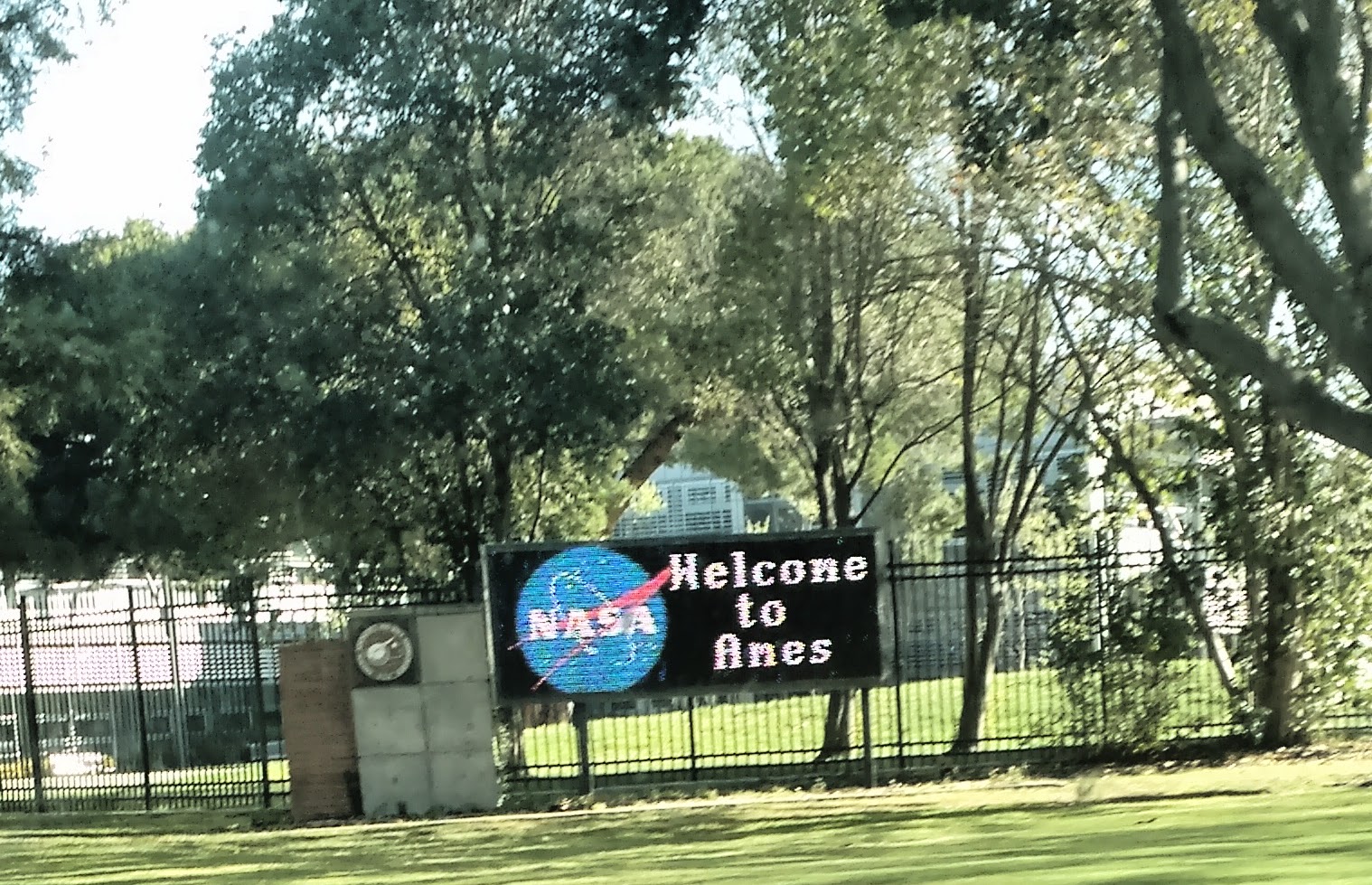 Yes, that is totally a 1980s pixelated display outside the second guard gate.


The government is pretty strict about security because there is the possibility that NASA Scientists have access to sensitive and classified information(none of us really do). Because of this my laptop hard drive is encrypted and I can only log into my computer using a card reader attached to my laptop that reads my government issued ID card.

Every morning and every time I leave base I need to enter through two guard gates. At the first guard gate they check my State ID and at the second they check my government ID which required a background check and they contacted a bunch of my friends. The guard gates are staffed 24/7. 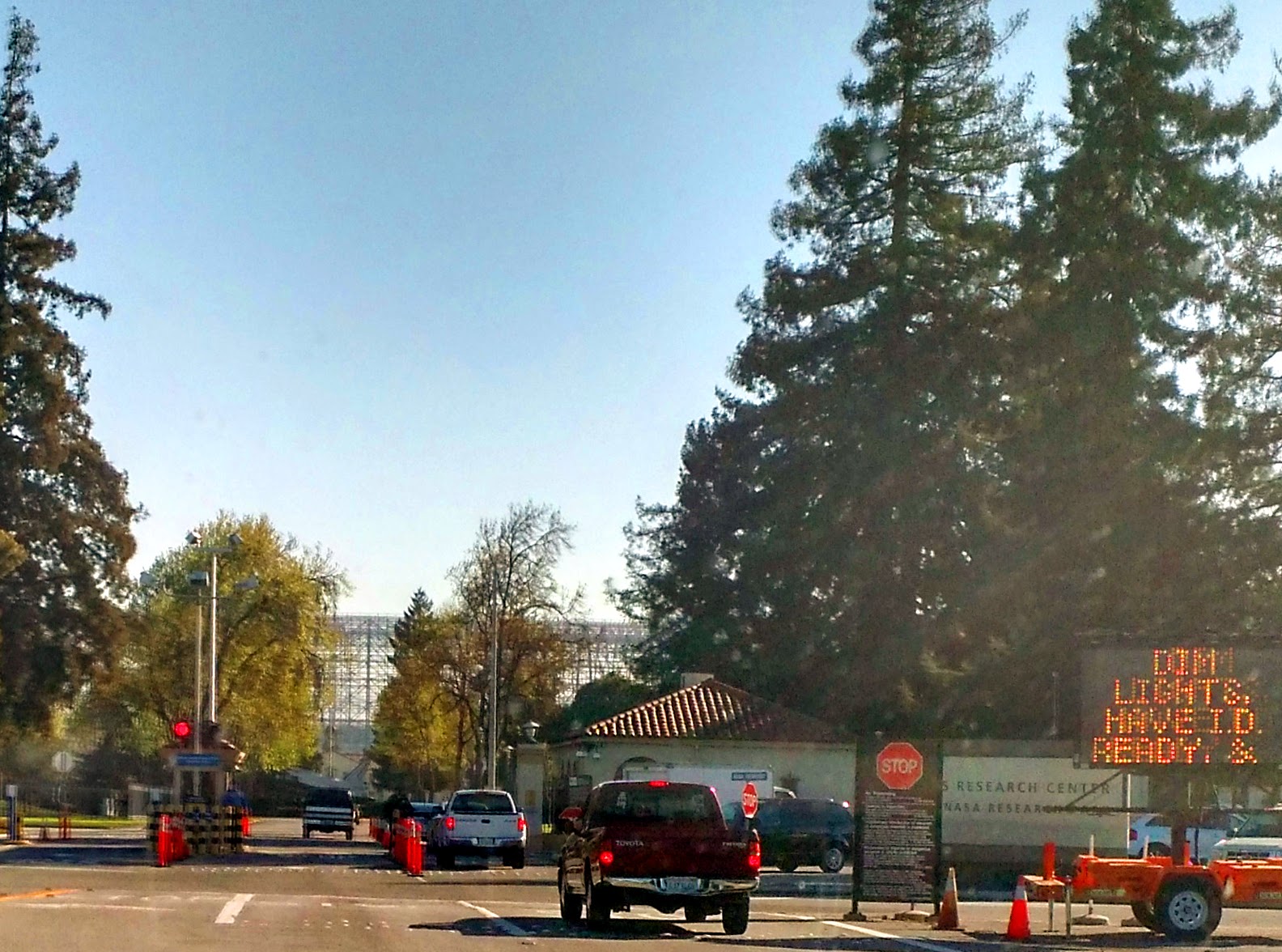 I work at The Centers for Nanotechnology and Mars Exploration. Besides Aerodynamics studies and some Mars Rover instrumentation and being the back drop for some MythBusters episodes, Ames is known for Astrobiology but fortunately not the Arsenic Bacteria fiasco.

Our building isn't ugly on accident. The exterior is supposed to look like micrometeorite impacts on the Lunar surface. 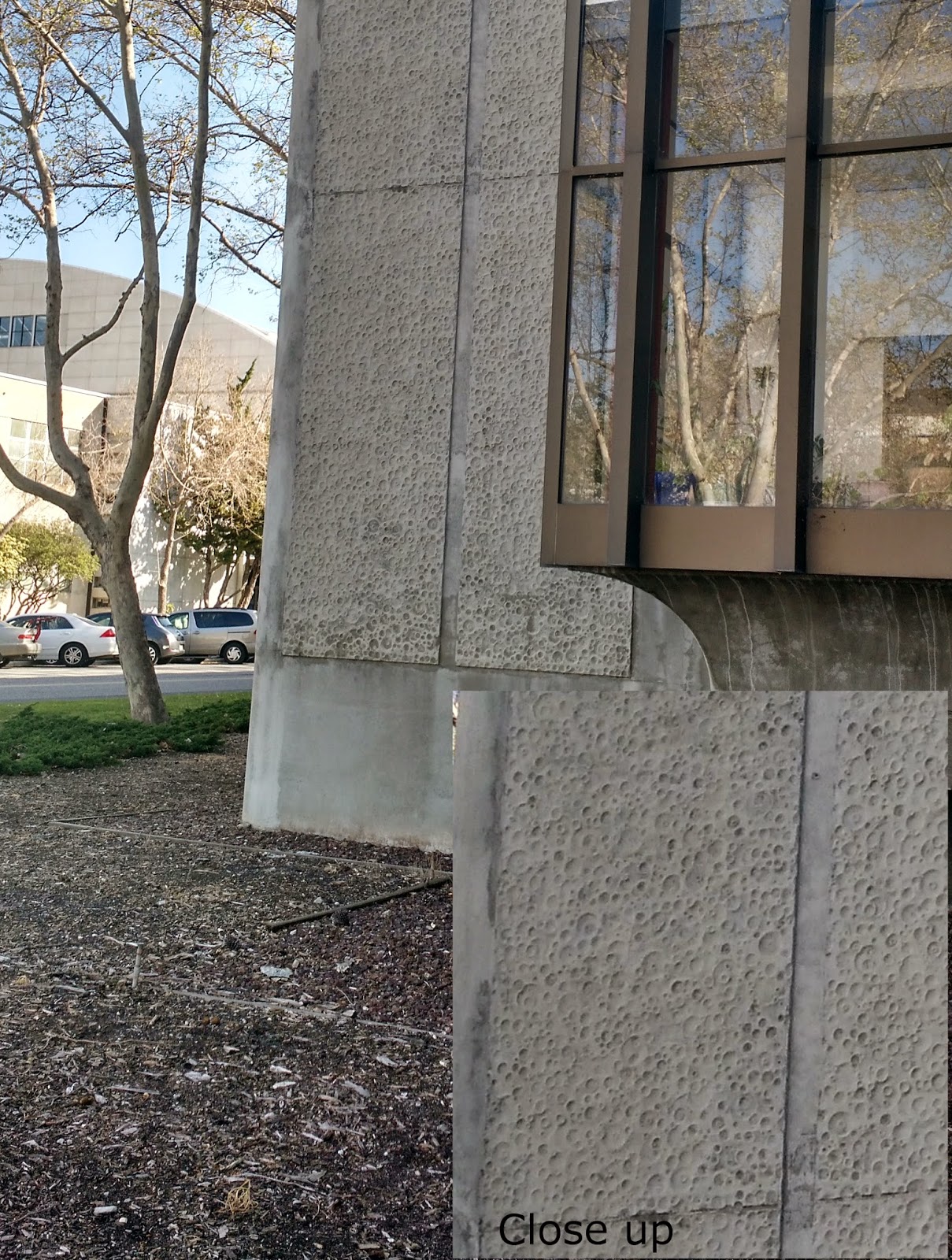 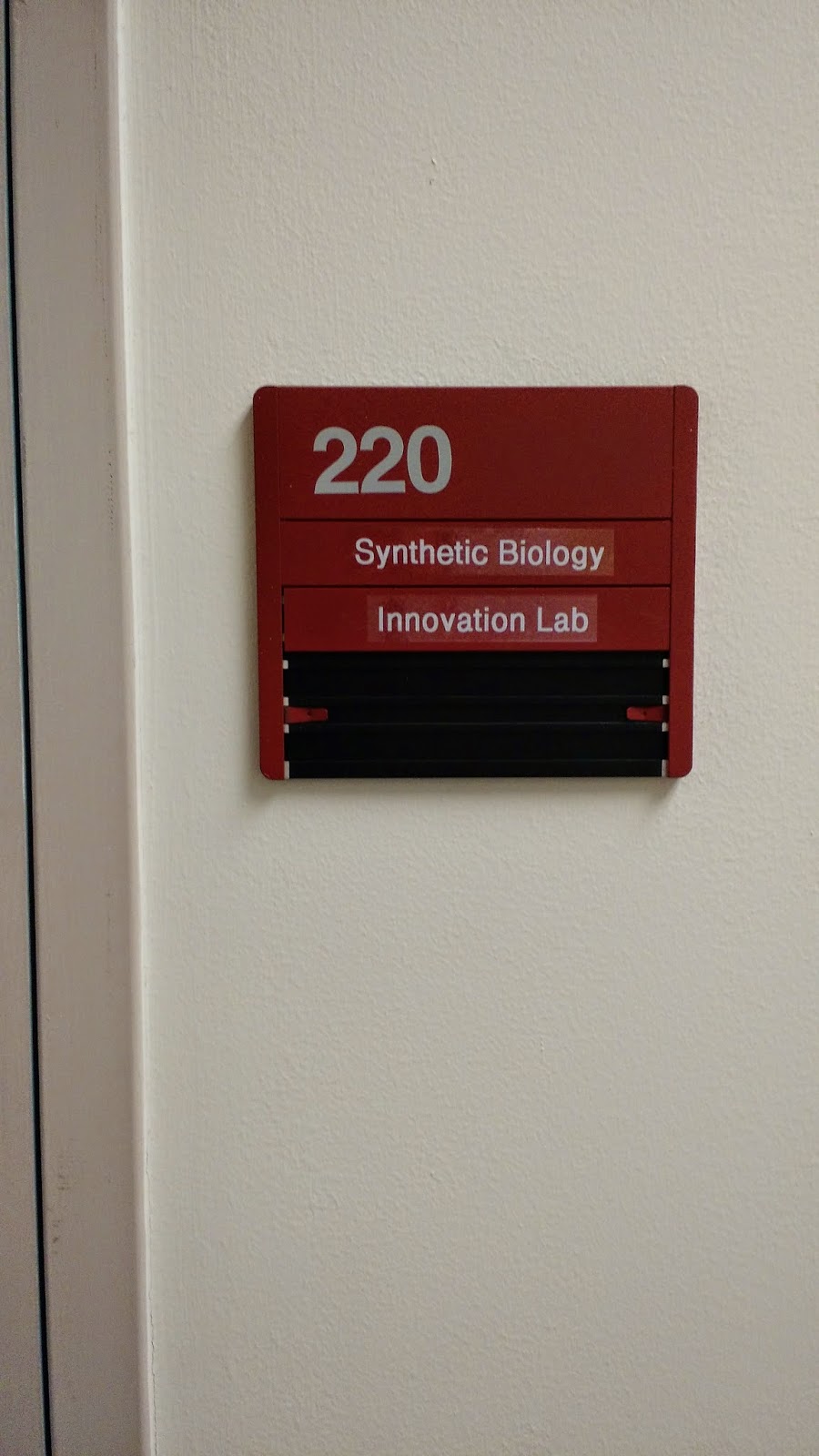 For an innovation lab our sign is pretty bad, I know, I didn't create it so don't blame me.

Where I work looks the same as most academic labs except that I build my crazy stuff like my artificial evolution system sitting on my lab bench with all the tubing. 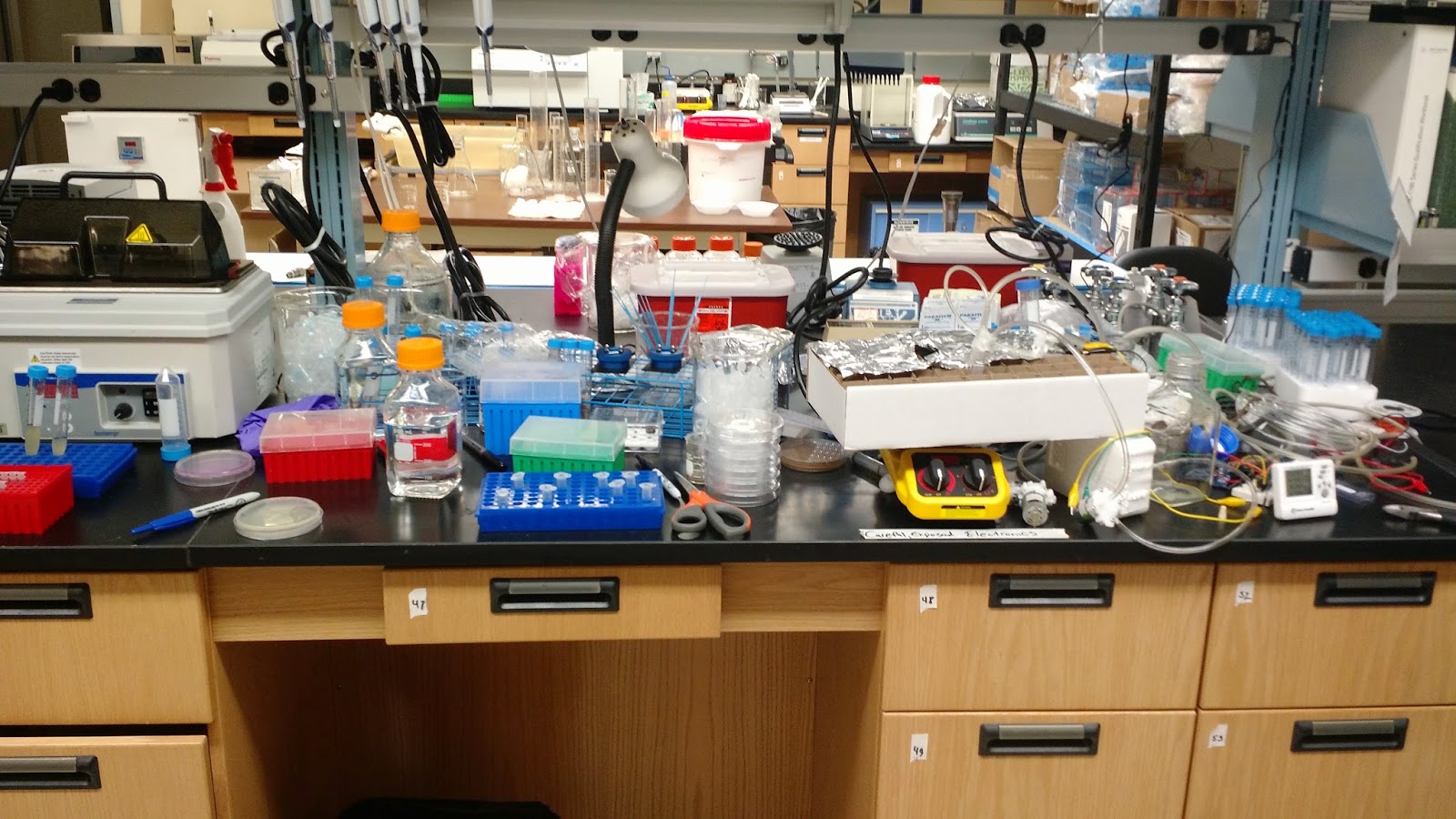 As a Fellow at NASA I had to write a proposal that was reviewed and approved by NASA and then they provided me with the resources I need to accomplish my projects (if you have a Ph.D. and want to apply go here: http://nasa.orau.org/postdoc/). I was chosen as one of ~200 fellows in the whole world, they chose around 50 each year as the old ones rotate out. Fellows apply to work at one of the 10 facilities in the US not just Ames. Despite trying to follow my research proposal, as is Science, my projects change and so I am usually able to follow whatever crazy ideas I may have as long as it follows along with NASA's goals of space exploration. Especially if it involves going to Mars! It is kind of weird writing proposals telling people how you are going to help Astronauts live on Mars!

Because Synthetic Biology is such a new part of NASA things are slow. There is not much overlap between the few projects that are going on and most of us researchers are working alone.

The mission to Mars is supposed to occur around 2030 so understand that the timeline at NASA is 15 years! That means the whole publish or perish academic game plan is kind of out the door. The goal is to think about the future. This is not easy for myself or most humans to try and build technologies for 15 years in the future but it is possible.

Though most people are stuck in the past...

~80% of NASA's ~17,000 permanent employee workforce(including students) is over the age of 40 (~70% over 45 and ~54% over 50). This is worsened by the fact that anecdotally I have noticed that very few people retire, creating very few new openings. Numerous stories have been told to me of people dying on the job from old age (YIKES!).

However, most employees at NASA are contractors and not permanent employees. This means that the government hires a company to do some work and once the contract is up for recompete (every few years) a contractor can potentially lose their job, though many manage to stay on and just switch contracts to the new company. Most of the work at NASA is done by contractors and the average age of contractors is higher or just as high as permanent employees! Let me stop and say that there is nothing wrong with people being over 40 years of age in Science, the problem is that when the influx of new ideas and talent is not around, everything stagnates. In my opinion research Scientists need graduate students more than graduate students need research Scientists both because of labor and ideas.

We constantly receive emails telling us how to avoid slipping and hurting ourselves and how we should not believe people when they send us spam email asking for our bank account information. It sometimes feels like I am in a retirement home.

The numbers for total NASA employees including fellows(~200) and contractors(20,000-30,000) is difficult to find but is suggested to be around 50,000-60,000. During the Apollo era the number was around 300,000. I don't know if NASA should still have those same numbers and I think it would be a waste of money. All the bureaucracy at NASA prevents things from moving quick. In synthetic biology NASA still has not even really done recombinant protein expression experiments(a basic experiment) on the International Space Station (ISS) and who knows if it will even happen anytime soon? But we are supposed to create "synthetic biology" for space.... I think NASA does a great job in research and development but I think private industry are the ones who are going to push the boundaries of space exploration. Companies like SpaceX move so much faster and are willing to take more risks than NASA.

I have learned alot at NASA about how to deal with bureaucracy. I always tell people that working in the government is exactly like what they think, no one works, money is wasted and everything moves sooo slow. I think the problems come from a combination of things but mostly it is people just not caring. If you couldn't be fired from your job even if you didn't even come into work, would you go into work? Alot of people don't come into work. My "mentor" Masood Hadi, comes into work about once a month and works a second job...
You can imagine coming from a top tier research university that this was big a culture shock. I worked 7 days a week and so did many people I knew and now most people I know barely work 3 days a week.
A funny story, after working at NASA for about 6 months, the Vice Chair of our division told me that working in the lab so much presented a safety hazard(I had a higher chance of being injured) and so I needed to not work in the lab at least one day during the work week. I tried to argue but to no avail...

Working at NASA has been interesting. I am fortunate to have had this opportunity and to explore crazy research projects and ideas and I have meet some cool people but I plan to leave if I can find another job that fits me.

In the next few weeks I will post more articles on the topic of NASA, including more about my research and how and why the Synthetic Biology program at NASA is being ended this year.