Science Hack Day San Francisco was this past weekend(Oct. 4th and 5th) and it was a good time. Much better than the Y combinator hackathon I went to a few months ago. The great thing was that most everyone was there to have fun. There wasn't really any competitive spirit and people didn't limit themselves to ideas that were pitches (though it is SF so there were a few of those).

Github HQ is pretty damn nice. Besides the air conditioner being broken it would be great to have it there again.

My hackathon idea was pretty ambitious. The goal was to create a method and protocol for inexpensive, DIY, Sanger DNA sequencing. The goal was _not_ to be able to sequence a whole gene but perhaps just 10-20 basepairs. This would be enough to accurately identify if the DNA you have is your gene of interest.

The problem with normal Sanger sequencing is that it either uses really expensive equipment or uses toxic components, i.e. radioactive primers or nucleobases and acrylamide. What if it was possible to do it without these things?

The goal was to be able to do DNA sequencing with a PCR machine and an agarose gel electrophoresis setup.

Sounds crazy, I know. Sounds very ambitious, I know. But the one thing I have learned over and over again in my life is that if you want to push our boundaries of understanding what is possible one needs to try something crazy and ambitious.

So first the results for people who don't really care about the protocol. I/We were having trouble having the sequencing reactions work so we ended up just attempting to separate two primers that differed by only one base pair. The ability of Sanger sequencing to work depends on if one can separate DNA fragments with base pair resolution. 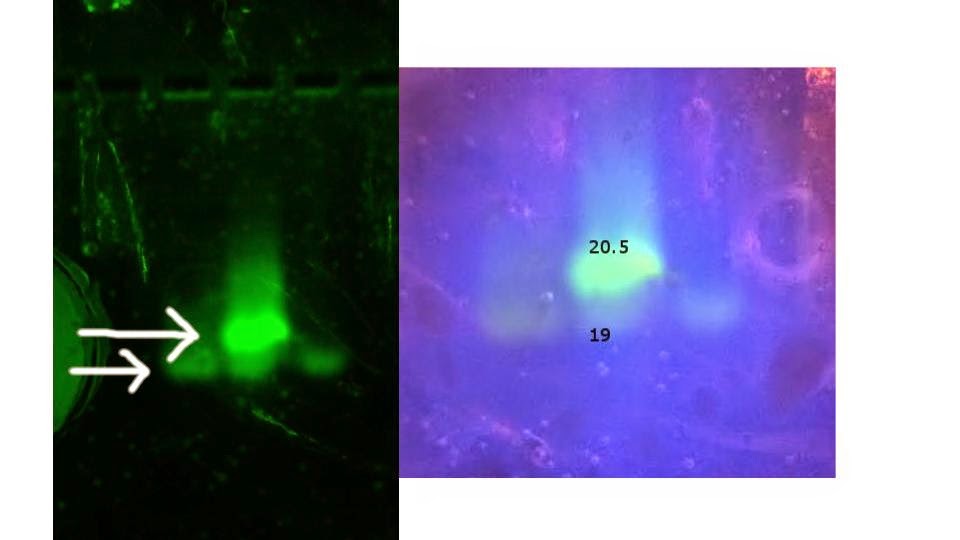 What one can see in the image in the middle lane is the T7 fwd primer with a fluorescein label and the T7 terminator primer stained with gel green on a 10% agarose gel. The reason I wrote 20.5 instead of 20 is that the fluorescein molecule adds about 0.5-1 base. Still it is amazing resolution. To our knowledge this has never been done before, 1-2 base separation in an agarose gel (imaging was done with a $2 setup, some LEDs and a plastic filter).

I plan to continue this project and successfully run a sequencing reaction to show that not only can we separate with proper resolution we can also sequence.

Information about the experiment is here:
https://docs.google.com/document/d/1d3O254Akps58kaRMoGHL3j47X3bQylEJ2Flbv8UixLc/edit?usp=sharing