Using a Radiator to generate electricity

So I little while ago I came up with the idea of connecting a bunch of thermoelectric peltier devices together and putting them on top of a radiator and using it to generate enough electricity that I can plug things into this device.

Pretty simple actually. Find a DC to AC converter, they use these in cars for making 12v DC into 120v AC. So basically now all I need to do is be able to generate 12v DC from these peltier devices.

If you are not familiar with peltier devices, they are actually super cool. They use the Seebeck effect to generate eletricity. Basically it is that when there is a temperature difference charge carriers will diffuse from the hot to the cold and likewise. Using semiconductors if we can make the diffusion of the carriers occur at different rates and gain charge separation we can create a voltage.

So I bought a couple peltier devices from eBay, from China and tested them out just by touching them to the radiator. Now the peltier works by temperature difference I know but it was just tests. I found I could measure about 0.3v DC from a TEC1 12706 without any fans or any help creating a better temperature differential. So if I need 3 units per volt and and 12 volts, that's 36 units at about $3 each which is more than I want to spend. Basically, I am hoping I can create a large enough temperature differential that I can make due with 12 or 20 or something. 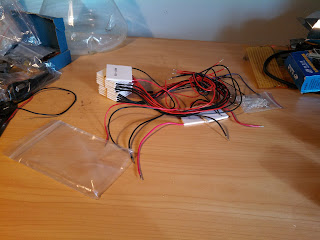 I also bought an emergency thermal blanket so I can just drape something over the radiator. 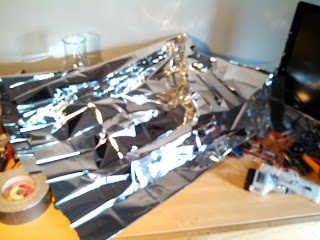 I tested the peltiers in series and they seem to work fine now I just need to solder them all together and duct tape? them to the blanket. Updates coming soon.