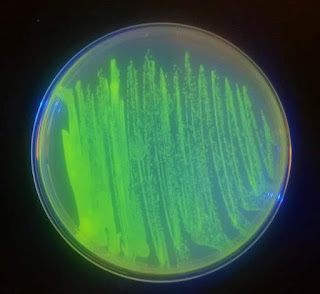 Agar plates are a staple of most labs.
They hold moisture well and can have a reasonable distribution of nutrients, chemicals and antibiotics that you may need to grow your organisms.

The problem is for the uninitiated, agar plates aren't intuitive. Without an autoclave, melting all the agar can be a strange process of uncertainty. Streaking out organisms is a mess and the agar is usually so soft most people starting their forays into genetic engineering just destroy the plate.

I have been thinking alot about how to make genetic engineering and lab protocols more intuitive. User interaction design is an important characteristic of making a technology widespread. And let's be honest science is not designed with the user in mind. Have you ever given someone a pipette for the first time and seen them try and use it? lol Fuuuuckkkk you science.

Science is so poorly designed that even PhDs struggle to learn and use new equipment, techniques and protocols. This is compounded by the problem that scientists are notoriously against change. If it works it doesn't need to be changed because generally scientists want to focus all their efforts on doing experiments so they can publish papers. There is no incentive in science to design better ways of doing science.

Running The ODIN, I get to see where people struggle the most when trying to learn genetic engineering and one of the biggest problems is making and using agar plates.

What you really need is something that is easy to use, it doesn't shatter into a million pieces if you touch it and is intuitive for most people.

To me alternatives would be something people are familiar with. That we use in our everyday life. I'm just winging it here and not proposing these as alternatives but trying to think differently about science.

I chose a bagel


I wanted to see if I could grow some genetically modified bacteria and propagate the cultures. I know this seems insane and I think I went off the deep end on this one but I think that is sometimes what is required. 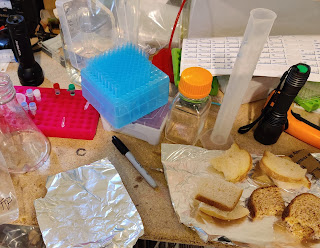 First, I wet all the bagel with either water and ampicillin or LB ampicillin (LB is a nutrient media that helps bacteria grow). Using antibiotics like ampicillin is a standard method in genetic engineering to select for the genetic modification. I took some ampicillin resistant GFP engineered bacteria and streaked it on each of the bagel pieces. The fluorescence from GFP makes it easier to track the bacteria through the experiments. Streaking bacteria on a bagel is tough as the surface was soggy and uneven and inoculation loops aren't really made for that. Still I managed to get a little bacteria on. 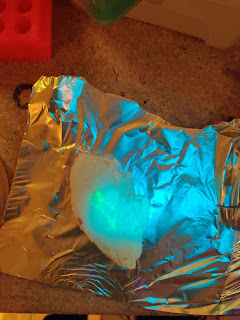 I put the materials in ziplock type plastic bags. I imagined this would hold the moisture in. I then incubated them at 37C overnight.

The bags did not hold moisture well and the materials seemed to dry out a bit. I think this will be one of the most important things to think about in the design. 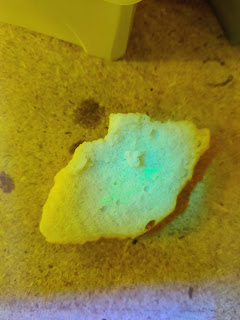 Though the light conditions of this image are not comparable to the original taken before the experiment it definitely seems like there is less fluorescence than when I started, I imagine because the bagel dried out. ugh.

Still, its seems like the bacteria survived and so I decided to break off a piece of bagel and use it to inoculate some liquid media and see if I can propagate the culture. 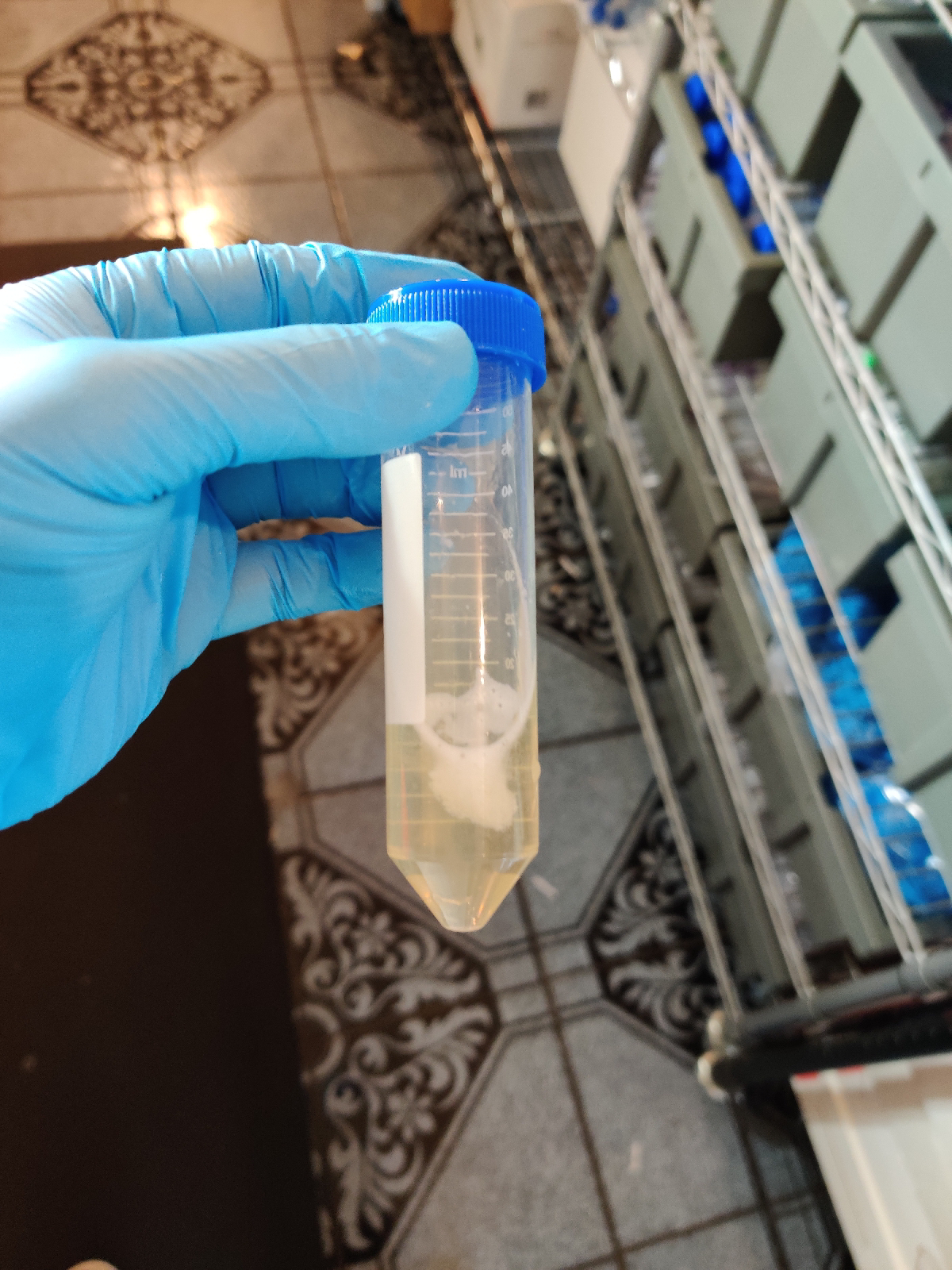 I used a centrifuge to spin down the culture and the bacteria that grew in the culture are fluorescent meaning the bagel inoculation worked. 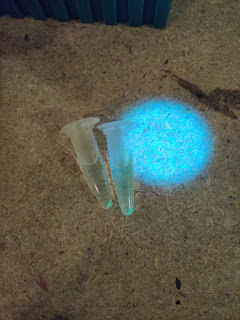 After 48 hours of having the fluorescent bacteria on the bagel there doesn't appear to be contamination of any kind and the bacteria are still fluorescing.

Am I really insane for doing this or are the people who continue to do science in such a kludgey way insane?