Yeast is used in alot of food and drink. It is used to make some of my favorite drinks, beer and whiskey.

I started engineering Yeast about 1.5 years ago. I thought it would be a useful skill to have in general and as I moved more towards running The ODIN fulltime I wanted to be able to have some yeast strains and experiments on the site.

My first ever attempt to genetically engineer yeast was a success(I used the Lithium Acetate method). I don't know how? because I didn't use SS DNA and probably used like 400ng of plasmid.

I eventually figured out how incubation time at 42-43C matters much more than it does in bacteria and many more things and had it working again. YAY! I don't mind yeast much and almost prefer it to bacteria now.


The other part of this story is Nick Moench, who runs Inoculum Ale Works. He sent me some emails(they were loooonnggg) about how he ran his own brewery in Florida and was interested in Engineering yeast to do cool things. At the time it was just me doing ODIN stuff so I didn't have much time or money to do anything and I think we had a few emails. He almost appeared on our now maybe defunct video cast.


I guess I half-hearted thought about making beers and stuff but as I preferred to drink with the least effort possible, i.e. purchase the alcohol. I didn't think much about it. Eventually some other people started helping out with The ODIN and we ran a few preliminary experiments on fermentation using Saccharomyces cereveisiae BY4742. To us non-brewers, we were excited when we could grow GFP yeast in grape juice and still see the fluorescence, days or weeks later.

Nick and I had been chatting on facebook and I brought up how we had grown some genetically engineered labs strains of yeast and that they glow green in grape juice even after weeks. He was interested and excited. He wanted to brew some beer. Unfortunately, as non-brewers we didn't really know what went into brewing beer. We sent Nick the strain and it failed, miserably. I think Nick thought it was his fault, only for us to discover that one of the most abundant sugars in beer(maltose) couldn't be processed by most yeast lab strains(S288C derivatives have knock-outs for enzymes that import(I think) and degrade maltose, this includes BY474(1|2), W303, &c). Also, there are other things that are important like attenuation and flocculation of the yeast that helps make a good beer that brewing strains are selected for.

Sad. But not heart broken. There are plenty of brewers strains of yeast that can process maltose. Problem is that they are not auxotrophic so normal yeast plasmids would be difficult to use and select for.

We tried a bunch of different  engineering methods with a bunch of failures. Nick tried his best to nurse the lab strains in hopes that he could coax them into making a beer, almost. We both run businesses and have many other projects but it was cool having someone who actually wants to DO stuff and not just talk about it.


GFP beer like GFP yogurt is one of those fabled things that Biohackers have been talking about since Biohacking started and you can find many blog posts, writings or articles about people's theorizing about it. It's funny because at UChicago(where I did my Ph.D.), one of the many unofficial mottos is "That's all well and good in practice but how does it work in theory."(Scientists and scholars love to theorize, especially at UChicago). That is an interesting and sometimes fun part of Science but in the end if we all just theorize nothing will actually ever be accomplished. Why I hate business meetings and shit also. Let's stop talking about it and just do it. Show me what you got, I want to see what you got. Even if something is not completely planned out I have learned that sometimes you just need to say "Fuck it!" and try something out and see if it works.

We already knew that the GFP could fluoresce in sedimented yeast cells at low pH for weeks(months maybe) at a time. So I read and read some more and I know more about yeast than I wanted to(my brain-drive is already pretty full).

We manage to engineer yeast and Nick, had us run a bunch of experiments and we started working with the yeast and then he created some beer.

During fermentation you can see the glow of Green Fluorescent Protein (GFP) especially when the yeast flocculates or sediments. It is more difficult but still possible to see in bottled beer but it will require some more testing to make it a more consumer product if we eventually go that route.

People ask what it tastes like. Mostly, it just tastes like whatever you are brewing it to taste like. Nick's Brewery brews sours. So it has had a sours taste to it. We try and have some yeast sediment in there meaning there is a more yeasty taste than normal to it but otherwise there is not much in terms of flavours to discern the GFP! We debuted it at the New Harvest Conference, yesterday(July 13, 2016) and everyone was excited to try it and was excited about it! 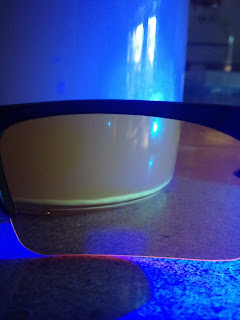 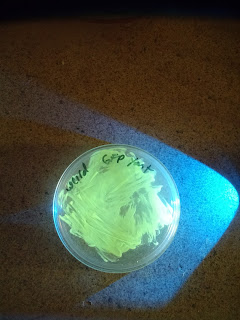 I guess GFP yogurt is next.