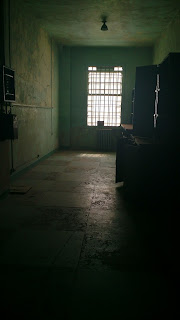 Ok, this blog post is where things start to become scary. My goal in writing all of this stuff is not so much to call out any individual but more to show people the crazy issues I have experienced at NASA.

People often say to me "Well maybe it is just in your building, or in your group or at NASA Ames." but it's not. I know this because I have reviewed papers for NASA conferences and been to NASA conferences.

In Science when you write a paper about the work you have done, you generally submit it for review by other Scientists so they can give you feedback(this is putting it nicely, more like non-constructive criticism) about your work. Then if your work is of reasonable quality it can be published. At NASA, I have had the "pleasure" of reviewing Scientific papers for conference proceedings, specifically the International Conference on Environmental Systems (ICES). This conferences focuses alot on the ISS and how to keep it up and running so the astronauts stay alive.

The first year I did 3 reviews and rejected two papers outright. The two papers rejected were from NASA and the one accepted was from a company doing work for NASA. And let me tell you, it was leagues above the other two papers in every way.

The main issue with the two papers was that their data had no relevance to their conclusions(such as studying if ghosts exist by looking for orbs in pictures taken, does one really prove the other?). To make it even worse, the papers were written with so many grammatical and spelling errors it was gross (I tried to list them all but gave up because it was taking up lots of time). There were graphs without any labels(seriously? how is anyone supposed to know what they are looking at), basic statistics errors and many more issues.

Despite how bad the papers were I decided to review again in 2015 because even if I was just one person maybe I could make a small impact. Maybe people would stop submitting their shit if they knew someone might reject it. To my absolute amazement I was randomly assigned a paper that wouldn't even pass a high school Science course. I won't post the paper but here is my review.

Review from 2015 ICES Conference
-----
This paper discusses and analyzes the chemical aspects of water used by astronauts aboard ISS 38-41. The paper is well written and provides a lot of data. Would be interested in more information as to the possible sources of the DMSD, is it coming from the ion exchange bed?

There are some major issues, Background[written] is almost an exact copy of the paper submitted to ICES last year(2014) by the same authors. Table 1 and Figure one are exact copies, Figure 3 is a zoom in of the Figure 3 from last year! The graphs are all almost identical except for 4 additional points on most of them. Not only was Figure 1 reused, it appears to be taken from another paper with no similar authors(http://ntrs.nasa.gov/archive/nasa/casi.ntrs.nasa.gov/20140002686.pdf)!!!!! If this is a common graphic floating around NASA you cannot publish it if YOU did not make it and you CANNOT republish it even if you did make it! This is considered Scientific plagiarism especially with image and data reuse and stealing. This is Scientific misconduct and this paper must be rejected!
-----

I was told that this was not that big of a deal and they weren't going to send my review to the authors....
The authors seriously tried to scam the reviewers by zooming in on picture and cropping it to make it seem like it wasn't the same picture they used from the previous year (Also, putting a picture of an astronaut in your Scientific paper, no matter how cool it may seem, has no Scientific relevance). You would lose your job most places besides NASA if you submitted this paper.

Imagine my frustration. Imagine if people knew that there were lots of researchers at NASA who either A) Didn't know how to do Science and write up a Scientific paper OR B) Plagiarized whole papers.

You are correct, I don't know if this is generally true across NASA.
But I have a number of lines of evidence against real Scientific contribution happening at NASA:

1) The papers I have reviewed(above) from other NASA research centers
2) The work of others I have heard from talks or in passing(I have walked out of at least two research talks because they were so bad)
3) Leaving the American Society for Gravitational and Space Research (ASGSR) conference a day early because the Science was so bad and when I asked specific question in a public forum about experimental issues they were ignored.

What do I consider bad Science? Something that would receive low marks in the first year of graduate school. This means that most of the Scientists seem to have only an undergraduate education's worth of knowledge and skill. However, this is probably true, as a Ph.D. or even a Master's degree, are not required to be a Senior Scientist at NASA.

I don't think most people are being flagrant though. I think that they just don't know how to write a Scientific paper or how to ask reasonable research questions because they weren't trained to be able to do these things.

There is a reason modern Scientists endure 5+ years of graduate school and PostDoctoral training, to make sure the Science produced in the world is of the utmost quality.

I understand this is not _all_ of NASA. There are still people at NASA that do contribute sound research, I am just beginning to wonder if they are the anomaly?