I will be honest with you. I am what most people might consider a "Climate Change skeptic". Maybe?

Why Climate Science bothers me. 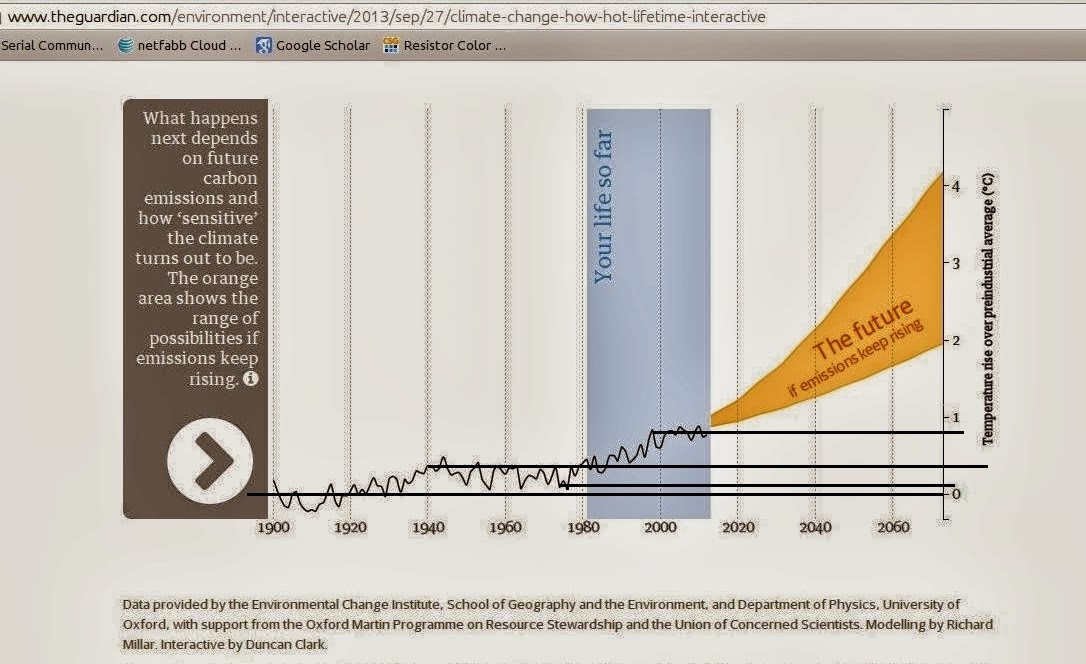 First the graph that I just saw on a website that inspired me to write this:

I added in the lines for clarity. I mean. I do maths and statistics constantly. Please tell me how someone created this "future" prediction and still has a job? 1900 isn't at 0 but is in fact higher than 0, from the looks of it 0.1 to 0.2C higher. So this means that the preindustrial average was also higher than 0? See how easy it is to manipulate with these graphs. Does anything in this graph look like an exponential increase? Yet, the "future" is. So the highest increase in temperature was between ~1980 and ~1995(~ <= 0.4C) according to the graph and then since the late 1990s there has been virtually no increase. If current trends of the past 10+ years continue there will be no more increase in temperature! WTF!!!! From ~1940 to the late 1970s there was a decrease in temperature.


The Earths temperature has fluctuated a shit ton over its history.

The first thing you notice is that the temperature has been warmer when humans did not exist. Whoa. The bottom part of the graph is a blowup of the past 800 thousand years. You can see an obvious pattern of warming and cooling. Whoa. The current temperature we are at does not fall outside any of the normal trends. Whoa. We are at one of the coolest times in the history of the Earth! WHOA! Do you notice also that there always appears a rapid increase then exponential decrease in temperature? Hmm.... And we appear to be in one of those increases. These increases appear to occur every 75,000 years to ~100,000 years. Hmm...

So wait but how much is the current temperature changing?

Now we are looking at changes of less than 0.5 of a degree C and sometimes on the order of 0.1 of a degree by averaging non-standardized measurements from around the world. I have looked at this data and plotted the data and it does show an increase since the 1800s (http://data.giss.nasa.gov/gistemp/) but is that increase important? Is it even caused by humans or is it a natural fluctuation? how reliable is the measurement data?

Ok so let's assume the measurement data is good. Is averaging the data the correct way to view it? The mean is usually a way to view "the central tendency" of a distribution. Is taking a mean of the whole Earth in any way a good measure of the overall climate trends. I don't see how this can be the case in any reasonable way.

If you told your landlord he needed to weather-proof the windows in your bedroom because they are not sealed and temperature is very low in there and he asked you to take the average temperature of the apartment and he would fix it based on that. Obviously, next to the radiator the temperature is going to be much warmer then in the room with the open window. You would probably say that a mean temperature of your apartment has little meaning. Also, simply being in the room for a long enough period of time would fluctuate the temperature.  Earth is similar the amount of heating in cities during winter changes regional temperatures.... (http://www.nature.com.proxy.uchicago.edu/nclimate/journal/v3/n5/full/nclimate1803.html) (PDF Available here because Science should be free)

So how does taking a mean make sense for the whole Earth when an insane number of factors are contributing to fluctuations most of which we don't even know about or consider.


I currently live in Illinois and though Illinois is long and actually in two different temperate zones let's look at a smaller more meaningful "mean".(http://www.isws.illinois.edu/atmos/statecli/climate-change/iltrends.htm) 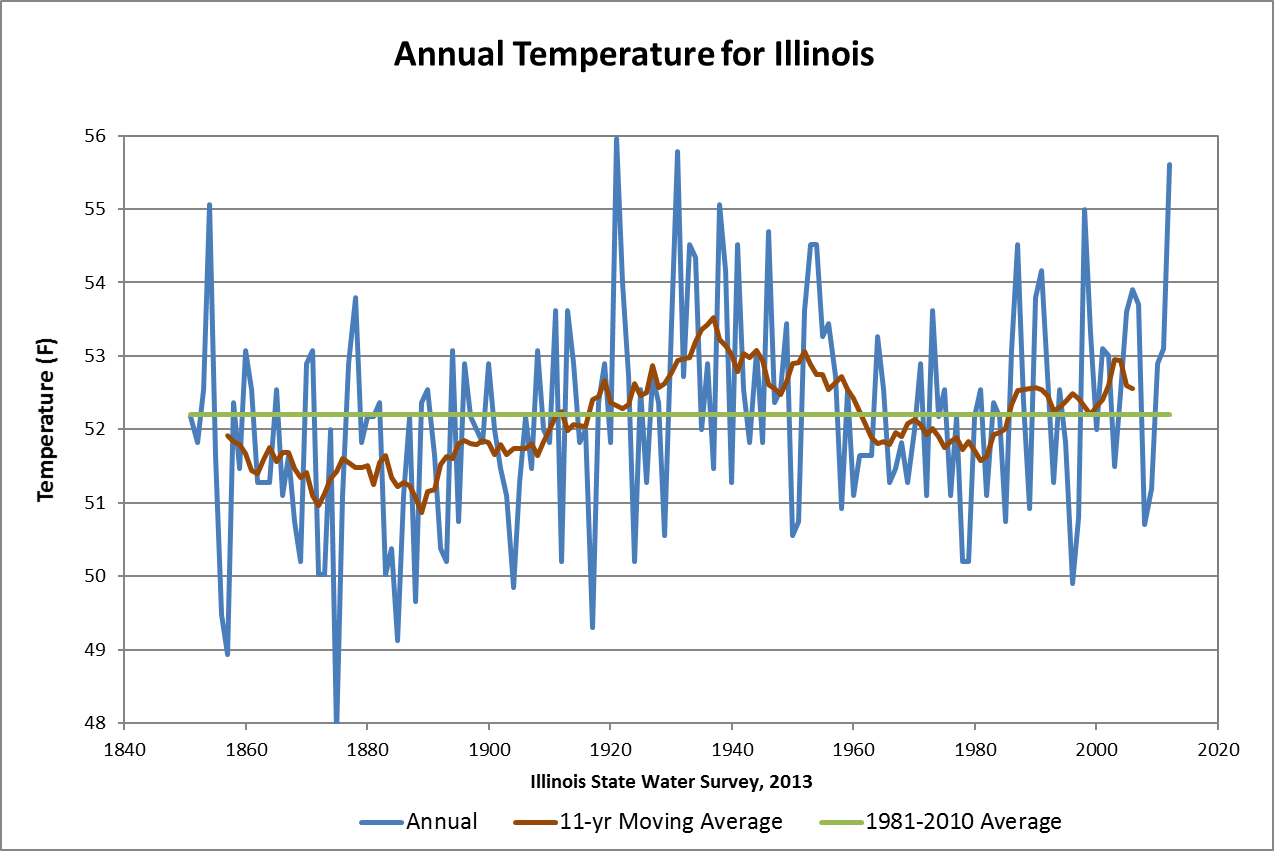 What we see immediately is that in single year periods there can be fluctuations on the order of 4-5 degrees F (2-3C). Whoa. That's crazy. What we also see is that the current "high point" in temperature was not the highest ever, it is less than points in the 1920s and is very similar to points as far back as 1850s. Though one might be able to pick out some small warming and cooling trends no one could really say that there is a warming trend that is different from anything seen before or greater than anything seen before. In fact it appears Illinois has been on a cooling trend since the 1930s if you look at the 11-yr moving average.

Ok well that's Illinois. What about places that are heavily polluted, lots of CO2 and greenhouse gases. Maybe it would be more apparent there. I know people will say, that's not how Climate Science works, the CO2 emission will diffuse into the atmosphere and over the Earth and I agree. But let's just do this for arguments sake.
I always hear Los Angeles is awfully polluted so let's look at Los Angeles. The temperature record is located here (http://www.wrcc.dri.edu/cgi-bin/cliMAIN.pl?ca5115). I picked Jan and June at random to have two different seasons. 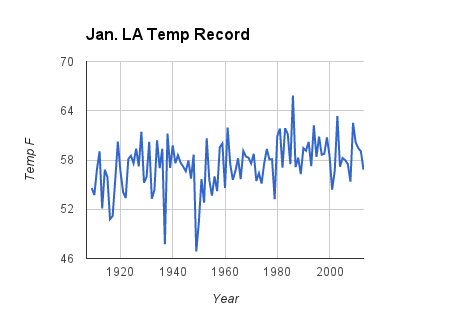 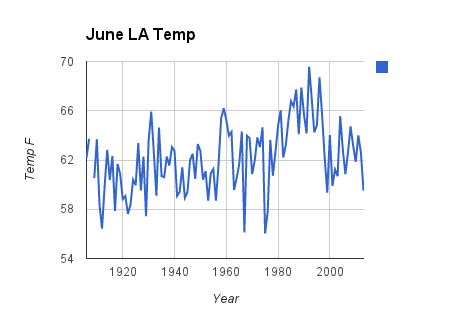 We see similar things in LA that we saw in Illinois. Changes in average temperature can be on the order of 4-5F(2-3C)  between years. However, we do see a temperature increase between 1980 - 2000 in both Jan and June. In June it seems that from 2000-Present the average temperature has dropped back down. The current June average was 59.5 F. If we discount that the average was 59.4 in 1999 this is the lowest temperature since 1976! Obviously, one cannot use individual yearly averages to conclude anything about trends. Either way the temperature fluctuations do not look in any way anomalous as compared to other times. Except that they look anomalously lower than 1980-2000. The Mean temperature for June between 1930 and 1940 is 62.4F and between 1961 and 1971 is 61.9 and between 2003 and 2013 is 62.5F. So is there a change? Are averages really the best way to look at this change? Hmm....


What about CO2? Let's look at the history of the Earth and the correlation of CO2 and temperature variation. This data is from the Vostok ice cores modified from Wikipedia. (original data can be found here http://cdiac.ornl.gov/trends/co2/vostok.html)

Ok so let's compare high levels of CO2 to high temperature. You don't need me to fourier transform this data to see the repeatable phenomenon. Just glancing at the data it looks like there is a trend but does high CO2 mean high temperature? The data is different in that current time is at the left at 0 thousands of yrs. 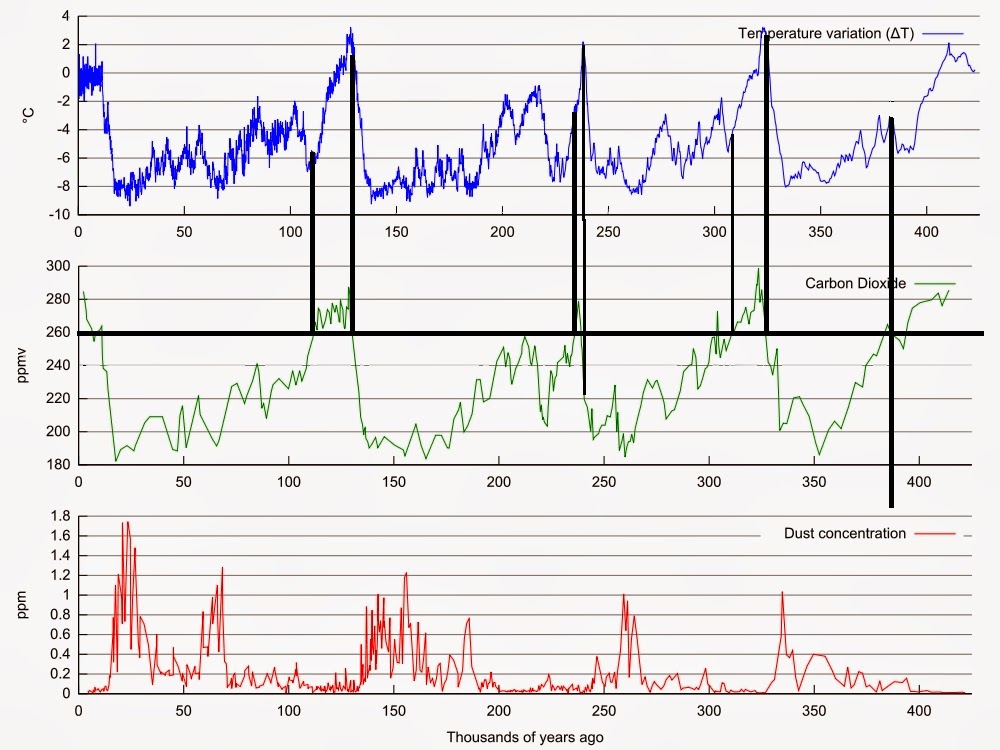 What we can see is that CO2 and temperature increase every ~75,000 years or so and then decrease again and the current CO2 and warming cycle appears to be on time. High fluctuations in CO2 levels appear to follow a pattern over the history of the Earth that doesn't seem to be deviated much by current patterns. The current increase in CO2 started ~25 thousand years ago!!! Is it conclusive that humans are the cause of the increase in CO2? Hmmm.

Current CO2 levels are currently higher(~395ppm) than they have ever been estimated from Vostok Ice cores. But so were preindustrial Vostok Ice Core CO2 levels at ~295ppm(PDF here because Science should be free). 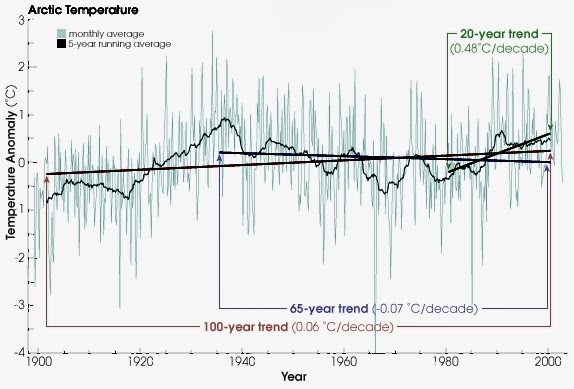 The Arctic a place constantly mentioned as a test case for global warming.

What does all this data say to you? Can you honestly look at this data and graphs and not be skeptical?

Does it appear that there is an increase in "average" temperature in some parts of the world? Sure, but what does that even mean(pun intended)? How can you average the temperature of the USA, much less the whole world? What is the standard deviation for these means? There IS NONE! Because we only have one Earth. Most data without replicates would receive an F in a high school Science lab.

Does this warming seem man made? If you look at the data it seems we are in a natural climatological cycle. Maybe not though.

Is the Earth going to warm 1.5C in the next 50 years? I don't know. It might. Though I might bet against it. Especially since there has been no significant change in the past 10+ years. Does anyone know? They don't. The Earth is N=1. Something constantly taught against making generalization about in statistics. In all honesty this is the first time anyone has ever experienced what we are experiencing on this planet. We really don't know what will happen.

That being said. I don't own a car, I walk and take public transport everywhere and I recycle as much as possible. I am not for pollution or creating trash. However, I am against trashy statements being made(pun intended again).

Science is not zealotry it should be questioned and we should be critical of it.

The Earth is very complex and at this point in time uncomprehendible and unpredictable. Yet, people are telling us that they can predict what will happen in the next 100 years with a 95% confidence level (whatever that means). A 95% confidence interval is only as good as the data and models. If I predict that tomorrow will be 80F because it has been 80F for the past 3 days I would have a 95% confidence interval. But we all know that is bad. That is not the way temperature or climate works. Especially in Chicago, jk jk lol. This data is very missleading because there is only 1 Earth. It does not even make sense to use it that terminology because they are based off models not real life!!!
Currently there is a prediction of between 2C and 5C+ change in temperature. That is a 3C range between the models. The current temperature increase since preindustrial levels has been on the order of 1C. So the error is currently 3 times greater than any change we have even measured yet. I just don't understand how the global mean temperature could be ~ the same for the past 10+ years and no model created shows little or no increase in temperature? I just don't understand it. 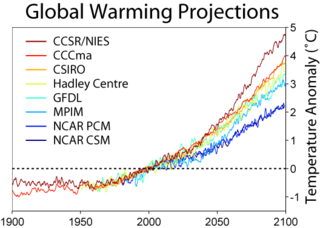 (read here for more info on the graphic https://en.wikipedia.org/wiki/File:Global_Warming_Predictions.png)

Is the data saying what the media is saying and do we know enough to actually make a 95% confidence level actual mean anything? I think not but maybe I am just a deranged person who is viewing all this data completely wrong. I never said I was a climate scientist just a skeptic.

I wish I could talk to a climatologist and ask them about this data.

All My Friends Are Dying